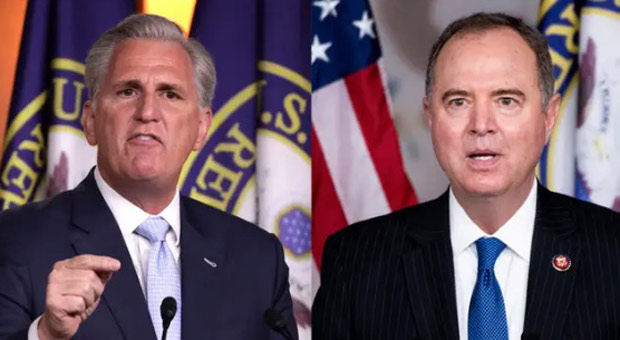 Kevin McCarthy confirmed that Democrat Representatives Adam Schiff, Eric Swalwell, and Ilhan Omar would not be serving on the committees as he prepares for their removal.

Adam Schiff, a favorite of the far-left mainstream media, is a serial liar.

Omar will be ousted from the Foreign Affairs Committee, while Schiff and Swalwell will be removed from the Intelligence Committee, the Washington Examiner reported.

“Those two won’t be on intel,” McCarthy said, referring to Schiff and Swalwell.

RELATED: Adam Schiff: Pelosi Is the ‘Most Impressive, Incredible Speaker in Our History’

“You have Adam Schiff, who had lied to the American public time and again. We will not allow him to be on the Intel Committee either.”

Omar responded to McCarthy’s plans to strip her of committee assignments on Sunday:

“I do have to say for a speaker that has faced a historic humiliation — that had gotten elected after 15 rounds, surpassing a record that was set pre-Civil War — there is an opportunity here, as he has said to not do things in the way in which it has been done before,” she said.