The Emasculation Agenda: Why Are They So Hellbent on Feminizing Men? 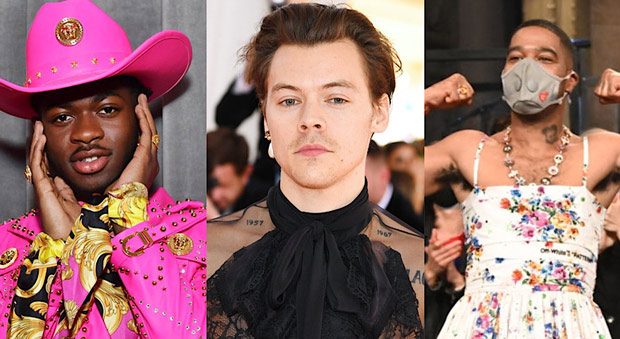 The type of man portrayed as ‘desirable’ in the era of peak wokeism is a far cry from the days of pre-culture war normality – the emasculation of the modern man appears to be in full swing.

But my preferences haven’t changed; the media, fashion, and entertainment ideas have.

Many within generation x, including myself, have been given the unique perspective of watching the new generations of young people indoctrinated in real time.

We remember what it was like before the apparent weaponization of culture, pre-internet, and when women and men who appeared in high fashion magazines encapsulated society’s idea of what was beautiful and desirable.

I’m not claiming those magazines were perfect, far from it. You could even argue such publications promoted anorexia, and gave young women anxiety about whether their body was good enough. But feeding young people with images of obesity and gender dysphoria in those same magazines is not the solution. This not only appears to be mass indoctrination, but an attempt to dilute what we perceive as femininity and masculinity from each side of the spectrum.

Moreover, what we appear to be witnessing is an apparent attempt to totally dismantle the entire idea of gender under the guise of ‘inclusivity.’

Unless you’ve been living under a rock for the past five years, you would have heard of ‘toxic masculinity,’ a phrase used to describe masculine traits deemed ‘undesirable’ in the woke era.

Emasculation of the traditional male

What is emasculation? And why are they so hellbent on destroying alpha males?

To understand, we need to examine the politicization and inversion of social injustice – how fighting against discrimination and systemic harm suffered by minorities has been weaponized to cause further division.

This weaponization does not come directly from being pro-trans, pro-LGBTQ, or pro-anti-racism – it comes in the form of demonizing and blaming vast swaths of society for the suffering of these minorities; like white people, the nuclear family, patriotism, and of course, ‘toxic’ males. Ironically, those ‘woke liberals’ have become the very thing they are fighting against, small minded fascists wanting to impose their world view on everyone else.

Over the past two decades, we’ve seen the portrayal of men with leading roles in films dwindle from passionate, heroic alphas to bumbling fools or being entirely replaced by gay characters or women. Even camp “gay” characters are now being portrayed in an effeminate way.

Following the fallout from the #Metoo movement, COVID, and the rise of Black Lives Matter, White male Hollywood actors began complaining they were no longer getting roles and even being fired.

One actor described the current atmosphere in Hollywood as “more toxic than Chernobyl.”

A Hollywood executive who spoke to the Daily Mail on condition of anonymity in 2020 said the climate was toxic for any ‘white, middle-aged man in showbusiness,’ adding their careers ‘are pretty much over.’

“We’re only hiring people of color, women or LGBT to write, star, produce, operate the cameras, work in craft services,” he said at the time.

Two years later, a colossal pushback against sidelining of alpha males manifested in the Tom Cruise film “Top Gun: Maverick,” which gave Paramount Pictures its highest earner at the domestic box office in its 110-year history.

Unlike other recent Hollywood movies, the one thing that Top Gun: Maverick didn’t do is ruin an existing franchise with a ‘woke’ ideology.

The film evaded preachy writing, politics and did not emasculate the lead character, instead stepping out from the oppressive cocoon of rampant virtue signalling to make an incredible film.

The film didn’t try to be ironic either; it was refreshingly one-dimensional and didn’t play Cruise for cheap laughs. It is also worth noting that the woke idiot’s argument about Hollywood’s “lack of diversity” becomes a nothing burger when films like ‘Fast and the Furious’ and ‘Mission: Impossible’ had such diverse casts.

So despite Hollywood’s push for the emasculation of the alpha male, one thing we can hold onto is the success of Top Gun: Maverick, a film that reflects the sentiment of the silent majority’s rejection of all things woke.

If they want to destroy the alpha male, they will have to try harder.