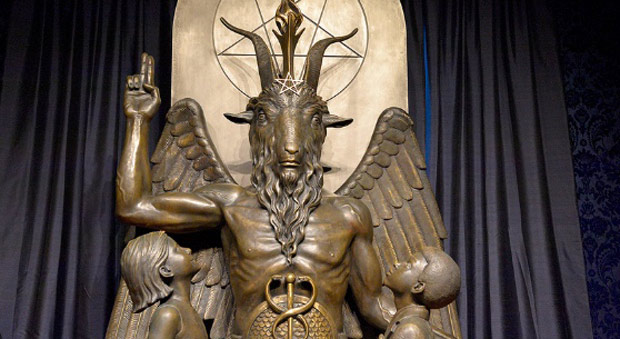 The Satanic Temple has set up a display called the “Serpent of Genesis” inside the Illinois State Capitol building next to the Christian nativity scene and the Jewish menorah.

The display consists of a leather-bound copy of astronomer Nicolaus Copernicus’ “De Revolutionibus Orbium Coelestium” – which translates to “On the Revolutions of the Heavenly Spheres” at the center of the display featuring handcrafted knitted apples and a serpent.

This is the fourth year in a row the state’s Capitol rotunda in Springfield has showcased displays from Illinois Satanic Temple.

As The Daily Caller reported, Minister Adam said their display revolves around one of the “most controversial books of its time,” noting the book favors a heliocentric model of the universe, theorizing the earth revolves around the sun, not the other way around.

The Index of Forbidden Books banned the text for 200 years, but officials from the Satanic Temple told Patch they believe it still provides a valuable lesson.

But the handmade elements that surround the book, and that were created by Illinois congregation members, carry a similar meaning, officials said.

In 2018, local media reported one state lawmaker denounced the Satanic Temple, demanding the removal of the satanic statue. However, a sign from the state of Illinois in the rotunda reads, “because the first floor of the Capitol rotunda is a public place, state officials cannot legally censor the content of speech or displays.”

“The State of Illinois is required by the First Amendment of the United States Constitution to allow temporary, public display in the state capitol so long as these displays are not paid for by taxpayer dollars,” the sign reads, ABC News reported.

“Temporary displays of this nature, erected in a public space in the Capitol rotunda, are protected by the First Amendment,” Haupt said in an email to Patch.

“The U.S. Constitution protects freedom of speech, which remains a hallmark and cherished principle of this country,” Haupt said.

Adam responded to those offended by the display by simply saying, “ok.”

“Being offended is something that is more than welcomed for them to be able to do — that is their right,” Adam said. “But we have every right to be here, and we’re not going to sanitize that message because someone else is offended by that.”

Beth Rogers, representing the Illinois Prayer Caucus, said of the nativity scene: The “little baby in the manger later crushed Satan the serpent’s head, and the gates of hell will not prevail.”

Be a shame if someone stole it.

We know how this ends. We read the book.