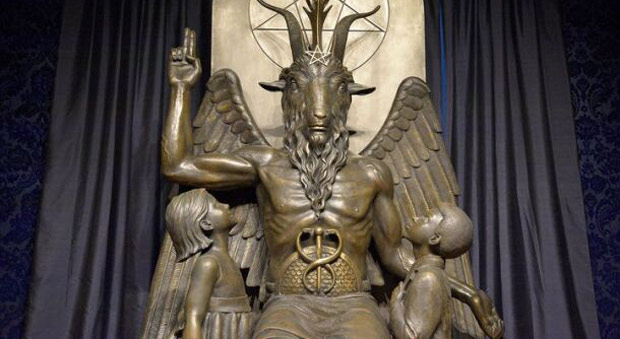 The Satanic Temple has filed a lawsuit against Indiana’s anti-abortion law, alleging it violated their religious rights.

The group, which claims to be theatrical atheists who use satanism as a costume in its opposition to Christianity, argues that one of its female adherents must have access to abortion in Indiana to practice her religious beliefs, The Hill reports.

“One’s body is inviolable, subject to one’s own will alone.”

Under this tenet, the temple said the fetal tissue carried in the woman’s uterus is not seen as an “unborn child,” as the Indiana Code states. Instead, from conception to viability, the fetal tissue is not believed to be imbued with any humanity or existence separate and apart from that of the pregnant woman herself.

The lawsuit also notes Tenet V, which states that “beliefs should conform to one’s best scientific understanding of the world.” Under this tenet, the lawsuit points out that early stages of fertilization, such as the creation of the zygote, are referred to as being an “unborn child” in the Indiana abortion ban. But through Tenet V, or through a scientific understanding, members of the Satanic Temple do not see a zygote, blastocyst, embryo, or nonviable fetus as an “unborn child.” These cells are seen as part of a woman’s body and not imbued with existence, humanity, or spiritual life; the lawsuit explains.

The lawsuit also claims that women have a right to terminate their pregnancy to exercise their religious beliefs, making the abortion law a violation of their 1st Amendment rights and 13th Amendment rights.

The group previously cited the Religious Freedom Restoration Act to overturn a set of pro-life laws in Missouri, but the U.S. Supreme Court declined to hear it.

Leftists have called Satanists their “last hope” to save abortion rights.

“Why Satanists may be the last hope to take down Texas’s abortion bill,” echoed Fortune that same year.

In 2020, following the death of Supreme Court Justice Ruth Bader Ginsburg, a woman wrote an op-ed in HuffPost exclaiming that she joined the group, believing that they are the best force in America to keep abortion rights alive.

“I believe that the Satanic Temple ― and its members’ dedication to fighting for true freedom ― represents our best, last defense against anti-choice lawmakers who are seeking to assert power over women’s bodies and take away our right to choose, We need creative, resolute thinkers who are willing to stand up for what they believe in and take concrete action to do so, and the Satanic Temple is full of those kind of people. I am proud to now count myself among their ranks”

The Satanic Temple describes itself as a non-theistic organization that uses Satanic imagery to troll Christians.

“The mission of The Satanic Temple is to encourage benevolence and empathy among all people, reject tyrannical authority, advocate practical common sense, oppose injustice, and undertake noble pursuits,” the organization says on its website.

What complete morons this complaining group must be! Do they not know simple biology, that the egg and sperm are both fully detached from their generating parent bodies when they meet and combine — in the uterus or a petri dish — to form a new and distinct human being, which then seeks shelter in the womb, and which the womb voluntarily provides unless the female has taken drugs to prevent it? They can have whatever religion they want, but that doesn’t give them the right to their own “facts”.