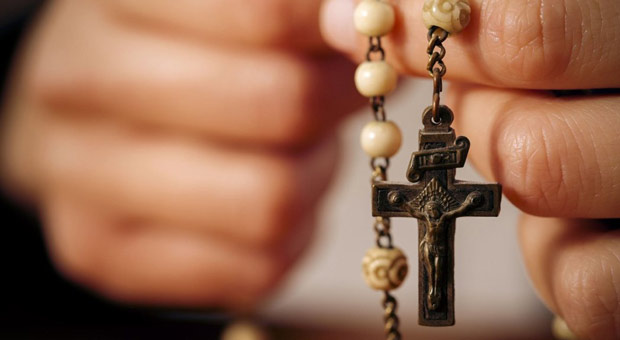 A writer for The Atlantic has claimed the Catholic rosary is now a symbol of extremism, comparing the religious symbol to an “AR-15” assault weapon.

In a newly published op-ed, writer Daniel Panneton describes the religious string of beads used by Catholics for prayers as a “sacred object for Christian nationalists.”

“Just as the AR-15 rifle has become a sacred object for Christian nationalists in general, the rosary has acquired a militaristic meaning for radical-traditional (or ‘rad trad’) Catholics,” writes Panneton in an Atlantic.

In Panneton’s op-ed, he cites progressive Church historian and commentator Massimo Faggioli in describing conservative Catholic bloggers as a “Catholic cyber-militia” who campaign against LGBTQ acceptance in the Church and for whom “rosary-as-weapon memes represent a social-media diffusion of such messaging.”

The writer then asserts that “the far right’s constellations of violent, racist and homophobic online milieus are well documented for providing a pathway to radicalization and real-world terrorist attacks.”

“Militia culture, a fetishism of Western civilization, and masculinist anxieties have become mainstays of the far right in the U.S.—and rad-trad Catholics have now taken up residence in this company,” he declares.

Panneton then notes one Catholic online store selling “replicas of the rosaries issued to American soldiers during the First World War as ‘combat rosaries,'” which he warns can be added to a “concealed carry” permit a storage box “resembling an ammunition can.”

He then notes a ‘dangerous alliance between prayer and warfare,’ writing, “the pontifical Swiss Guard accepted a donation of combat rosaries,” and during a ceremony at the Vatican, their commander described the gift as “the most powerful weapon that exists on the market.”

Panneton might also have noted that the modern-day Catholic Feast of the Holy Rosary was established by Pope Saint Pius V in gratitude to the Virgin Mary following the victory of the Christian League against an invading armada of the Muslim Ottoman Empire in 1571.

The writer also asserts concerns about manhood that “take an extremist turn, rooted in fantasies of violently defending one’s family and church from marauders.”

He also warns that “Catholics are a growing contingent of Christian nationalism” that embraces “righteous violence” against political enemies deemed demonic or satanic, “be they secularists, progressives, or Jews.”

Ultimately, Panneton fails to provide any evidence for the above claims, a clear signal that the piece was written without thorough research.

The “convergence within Christian nationalism is cemented in common causes such as hostility toward abortion-rights advocates,” he adds, but failing to note the massive outbreak of violence and blasphemy of Catholic churches following the Supreme Court’s reversal of Roe v. Wade in June.

“The ‘battle beads’ culture of spiritual warfare permits radical-traditional Catholics literally to demonize their political opponents and regard the use of armed force against them as sanctified,” Panneton claims.

“The sacramental rosary isn’t just a spiritual weapon but one that comes with physical ammunition.”