Republicans Announce Investigation into Joe Biden amid ‘Uncovered evidence’ of Defrauding the U.S 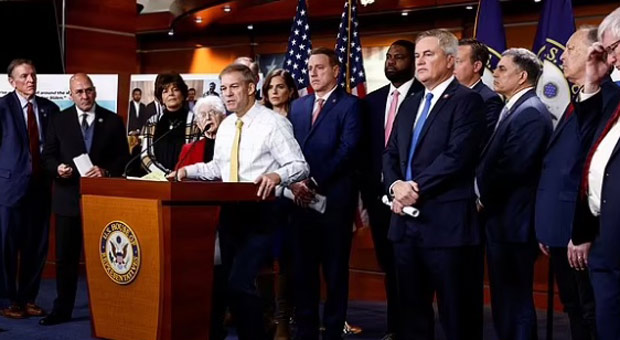 Comer said the Biden family “flourished and became millionaires by simply offering access to the family.”

“Was Joe Biden directly involved with Hunter Biden‘s business deals, and is he compromised? That’s our investigation,” Comer said.

Comer is the incoming chair of the House Oversight Committee, while Jordan is expected to chair the Judiciary Committee soon.

A report will be released Thursday outlining their findings.

The Republicans say they have uncovered evidence of conspiracy or defrauding the United States, wire fraud, violation of the Foreign Agents Registration Act, money laundering, tax evasion, and other crimes.

During the press conference, Comer said he believed the Oversight Committee had lost much of its credibility in recent years, which he blamed on California Rep. Adam Schiff.

The committee promised Thursday to continue to update the press and public with concrete findings.

At least one of those red flags, known as ‘SARs,’ allegedly ‘connects Hunter Biden and his business associates to international human trafficking, among other illegal activities,’ Comer said.

‘We have repeatedly called on the Biden Treasury Department to release additional financial documents to committee Republicans, but thus far Treasury has refused,” the lawmaker said. “We want to know what the Biden administration has tried to hide from the American people and why they are not being transparent.”

Hunter ally Schwerin was reportedly head of the president’s son’s company and handed most of his finances – and appointed to a position within the Obama administration when Joe Biden was vice president.

“After an apparent falling out with Schwerin, Hunter began coordinating business himself – and increasingly the deals brought in Joe Biden as a direct equity holder,” Comer said.

He claimed Hunter went a step further and tried to get these bank alerts quashed – allegedly with the help of a Clinton administration official.

“At a time when Americans are suffering from high energy prices because of this administration’s terrible energy policy, we find evidence that Hunter Biden and Joe Biden were involved in a scheme to try to get China to buy liquefied natural gas, and from a whistleblower, to try to get their foot in the door with China starting to purchase an interest in natural gas drillers,” Comer said.

He presented a print-out of a slide show regarding the business deal found on Hunter’s laptop.

The Kentucky Republican would not say concretely how that is linked to today’s energy crisis when asked, but said: “I mean, Joe Biden says he’s gonna stand up to China.”

“Joe Biden says he’s going to rewrite our whole energy policy…And he was a 10 percent equity owner in a company whose sole mission was to purchase liquefied natural gas from the United States and try to take over the energy the natural gas industry in America through natural gas wholesalers and natural gas drillers,” Comer said.