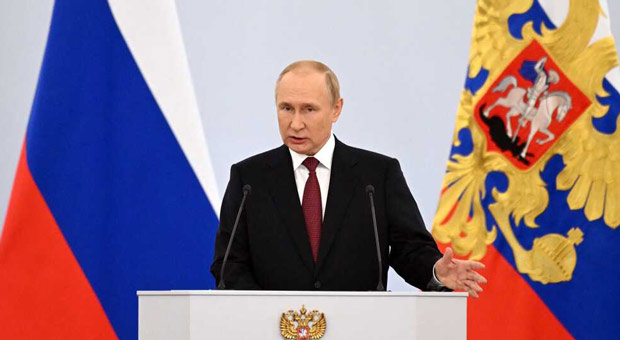 Russian leader Vladimir Putin said ‘satanic’ Western leaders have made the leap from ‘sanctions’ to conducting ‘terror attacks,’ accusing them of sabotaging the Nord Stream pipeline under the baltic sea.

During a speech before hundreds of dignitaries in the St George’s Hall of the Kremlin, Putin said the U.S. set a ‘precedent’ by using nuclear weapons against Japan at the end of World War II.

The Russian leader added that “those who profit from it have done it.”

Last week, Putin said he was ‘not bluffing’ when he suggested Russia could retaliate against attacks from the West.

Putin claimed the U.S. is occupying Germany in downplaying the relationship between the two nations.

“Germany is still their vassal, but the United States is still calling them an ‘equal ally.’ This is a real shame,” the Russian leader said.

After Putin announced he was annexing four Ukrainian regions, he delivered a speech claiming Russia would use “all the power and all the means” to defend its new lands from attacks and to help liberate the world.

Putin declared that ‘millions of people’ had ‘opted’ to become vassals of Russia.

“They are our people, forever,” he said to a standing ovation inside the Kremlin’s grand Georgian Hall.

The Russian leader attacked the U.S. for being the only country to have ever used nuclear weapons against another nation, saying it left a ‘terrible mark on the history of Korea and Vietnam.’

Putin described the West’s rejection of ‘moral norms’ as ‘satanic’ – saying the western nations have turned away from ‘traditional’ and ‘religious’ values.

The Russian leader asked assembled dignitaries if they wanted “children to be offered sex-change operations,” in a veiled jab at the ‘woke’ transgender ideology being forced on children in Western schools.

“From the elementary grades, perversions were imposed on children, which lead to degradation and extinction,” he said.

“To be drummed into them that there are supposedly other genders besides the woman and the man and offered to have a sex change operation? This is unacceptable for us.”

Earlier this month, Putin warned that Western elites’ “sanctions fever” against his country would only hurt them and their people.

In a speech before the Eastern Economic Forum in Vladivostok, the Russian leader stressed, “no matter how much someone would like to isolate Russia, it is impossible to do this.”

Putin said the blowback from EU and US-led sanctions is wrecking lives in the West.

“Now we are seeing how production and jobs in Europe are closing one after another,” Putin said, emphasizing that this is happening as “Western elites, who would not, or even cannot acknowledge objective facts.”

i believe putin is taking down the deep state cabal

We do not have leaders good enough to pull that off.

Putin seems to have Trump pimping for him too. Plays well on Russian TV. Time maybe for conservatives to consider getting a more level headed ‘leader’?

Putin’s a murdering thief and a liar who miscalculated. Now he’s losing in Ukraine and looking for an excuse to use tactical nukes to change the course of the war. But, It won’t work. Russia is in turmoil and it’s just a matter of time before someone in country rids the world of the human trash that is Putin
He blew a hole in the pipeline.

take out DC during a full session, and we’ll call it even…