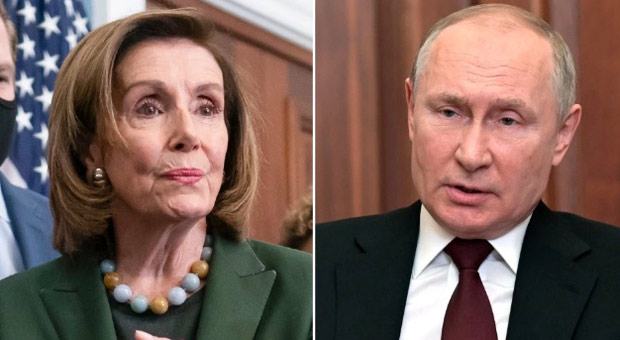 Russian President Vladimir Putin accused the U.S. of using House Speaker Nancy Pelosi’s visit to Taiwan as a “strategy to destabilize the region,” as well as prolonging the conflict in Ukraine.

The Russian leader’s remarks came during the opening ceremony of a security conference in Moscow:

“The situation in Ukraine shows that the U.S. is trying to prolong this conflict. And they act in exactly the same way, fuelling the potential for conflict in Asia, Africa and Latin America,” Putin said.

“The American adventure in relation to Taiwan is not just a trip of an individual irresponsible politician, but part of a purposeful, conscious U.S. strategy to destabilize and make chaotic the situation in the region and the world,” he added.

Putin said Pelosi’s visit was a “brazen demonstration of disrespect for the sovereignty of other countries and for its (Washington’s) international obligations.”

“We see this as a carefully planned provocation,” Putin said.

Moscow’s military intervention in Ukraine has now entered its sixth month, with millions fleeing their homes and thousands killed.

But Russia’s Defense Minister Sergei Shoigu said Moscow does not plan to use nuclear weapons in Ukraine.

“From a military point of view, there is no need to use nuclear weapons in Ukraine to achieve the set goals,” Shoigu said.

Meanwhile, Russia warned it might sever ties with the United States entirely as the Ukraine war threatens to damage relations for good.

Despite Putin’s warnings to the West not to interfere in the war, the U.S. and other Western allies have supplied Ukraine with billions of dollars of weapons.

Ukraine recently received a High Mobility Artillery Rocket System (HIMARS), which they claim has been effective against Russian forces.

After Russia was slapped with a barrage of unprecedented Western sanctions, Putin opted to increase ties with countries like China, Africa and Asia.

Moscow stood in solidarity with Beijing during Pelosi’s August visit to Taiwan, which angered China because it considers the region its territory.

China also set more military exercises in the seas and skies surrounding Taiwan in response to what it describes as a “collusion and provocation between the U.S. and Taiwan.”

The two weeks following Pelosi’s visit, China deployed military exercises that included firing missiles and incursions by navy ships and warplanes across the midline of the Taiwan Strait.

A top U.S. military commander said China’s decision to fire missiles over Taiwan is a “gorilla in the room” that has to be contested.

“It’s very important that we contest this type of thing. I know that the gorilla in the room is launching missiles over Taiwan,” Seventh Fleet Commander Vice Admiral Karl Thomas told reporters in Singapore.

“If we just allow that to happen, and we don’t contest that, that’ll be the next norm,’ he added. “It’s irresponsible to launch missiles over Taiwan into international waters, where the shipping lanes, where free shipping operates.”

The Seventh Fleet is based in Japan and is a core part of Washington’s navy presence in the Pacific.