China Ceases Communication with U.S. amid Fears of a ‘Rehearsal for Invasion’ 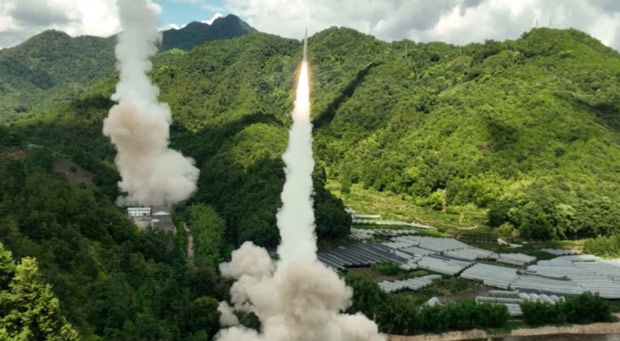 Communist China has cut off dialogue with the United States after it expressed anger following House Speaker Nancy Pelosi’s visit to Taiwan amid warnings the country is in ‘rehearsal for invasion.‘

Beijing sanctioned Pelosi and her immediate family in response to her “vicious” actions after the Chinese military fired 11 ballistic missiles into the Taiwan Strait.

A foreign ministry spokesperson said in a statement:

“Despite China’s serious concerns and firm opposition, Pelosi insisted on visiting Taiwan, seriously interfering in China’s internal affairs, undermining China’s sovereignty and territorial integrity, trampling on the one-China policy, and threatening the peace and stability of the Taiwan Strait.”

“We condemned the PRC’s military actions, which are irresponsible and at odds with our long-standing goal of maintaining peace and stability across the Taiwan Strait.”

Taipei reported multiple Chinese warships and fighters crossing the ‘median line from the center of the Taiwan Strait, separating it from the mainland.

The line is an unofficial border that Beijing insists “no longer exists.”

According to state media, Beijing’s latest moves are a “rehearsal for an invasion.”

“As of 11 am, multiple batches of Chinese warplanes and warships conducted exercises around the Taiwan Strait and crossed the median line of the strait,” Taipei’s defense ministry said in a statement.

Taiwanese officials described the exercises, which have encircled the island, as “tantamount to an air and sea blockade.”

Pelosi defended her visit, saying Washington would “not allow’ China to isolate Taiwan.

“(We) didn’t expect that the evil neighbor next door would show off its power at our door and arbitrarily jeopardize the busiest waterways in the world with its military exercises,” he told reporters.

The Chinese military said the drills involved a ‘conventional missile firepower assault’ in waters to the east of Taiwan.

The state-run Xinhua news agency said the Chinese military “flew more than 100 warplanes including fighters and bombers during the exercises, as well as ‘over ten destroyers and frigates.”

In May, President Joe Biden also angered China after U.S. forces would defend Taiwan militarily if China tried to take control of the island by force.

A professor at Meikai University and senior fellow at the Japan Institute of International Affairs, Tetsuo Kotani, said the Chinese drills could give the Japanese public a “more realistic” view of Tokyo’s defence capacity.

‘The latest military exercise has shown that what’s happening in Ukraine can happen in Asia,’ he told AFP.