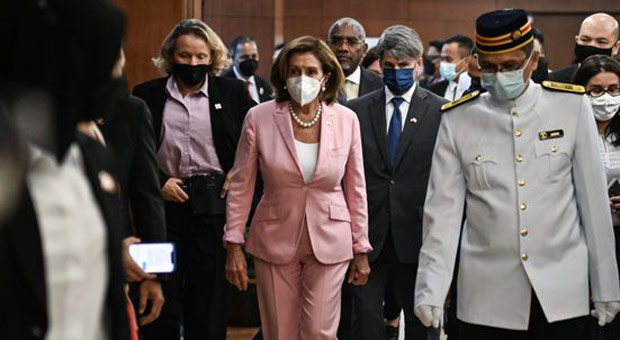 Taiwan airports received a multitude of threats, including bomb threats, before U.S. Speaker of the House Nancy Pelosi (D-CA) landed in the country.

Her visit has enraged China, claiming the island as its territory.

According to sources with knowledge of the situation, have for weeks predicted the speak would visit Taiwan as part of a greater Asia trip

As Aljazeera reported, Pelosi’s arrival in Taipei late on Tuesday risks triggering a crisis between China and the US.

China does not officially recognise Taiwan as an independent state but is still required by US law to provide its government with the means to defend itself.

Taiwan is a sovereign free state off the shores of China. The United States does not officially recognize Taiwan as a country due to former President Jimmy Carter changing that policy to appease China. Beijing claims Taiwan as a rogue “province” and falsely identifies its sovereign government as a “separatist” organization that has illicitly seized control of the island. The Chinese Communist Party bans any diplomatic relations with a country that recognizes Taiwan, or the Republic of China, as a sovereign entity, under a policy it calls “One China.”

Pelosi’s visit has alarmed the Chinese regime, as propagandists threaten to abduct Pelosi or shoot her plane out of the sky.

“If US fighter jets escort Pelosi’s plane into Taiwan, it is invasion,” Chinese regime commentator Hu Xijin posited on Twitter.

“The [People’s Liberation Army] has the right to forcibly dispel Pelosi’s plane and the US fighter jets, including firing warning shots and making tactical movement of obstruction. If ineffective, then shoot them.”

According to The Liberty Times, anonymous criminals have phoned in various threats against to to Songshan Airport and Taoyuan Airport.

The newspaper stated that all threats appeared to come from “abroad.”

Taiwanese officials have reportedly set up “response teams” in response to the threats.

“The Ministry of Transportation stated that at 9:10 this morning [Taiwan time], an unknown person left a message … threatening to deploy 3 bombs to detonate in the airport,” the Liberty Times relayed.

Songshan Airport service desks also received threats that “bombs had been placed in the trash cans” inside the airport, the newspaper claimed.

Taoyuan Airport received at least one bomb threat on Tuesday, “but so far, nothing suspicious has been found on the premises.”

The news highlights another clear sign that Beijing has prepared ‘military options’ as Eastern Theater Command activity takes place over airspace just outside the self-ruled island of Taiwan.

China has repeatedly warned against Pelosi’s visit to Taiwan, while the United States vowed not to be intimidated by Chinese “sabre rattling.

Meanwhile, several Chinese warships have been ailing near the unofficial dividing line since Monday, according to Reuters.