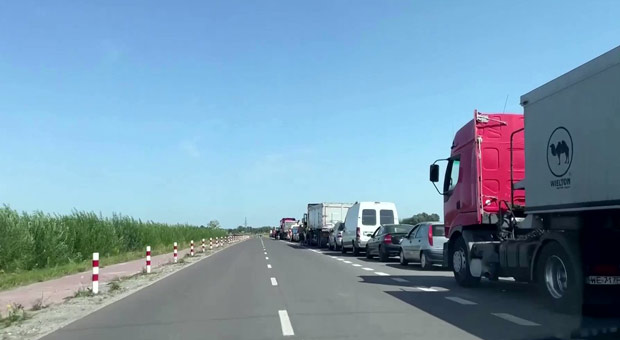 As Europe faces one of the biggest energy catastrophes in known history, Polish residents took no chances ahead of the coming winter shortages, queueing for days in their cars to stockpile coal – a scene reminiscent of the communist era.

As we reported earlier this month, residents in other European countries like Germany have opted to panic buy electric heaters amid growing fears gas supplies could be cut off.

For Poles, however, coal is a much safer option.

Hundreds of cars and trucks lined up at the Lubelski Wegiel Bogdanka coal mine as householders waited for days to stock up on heating fuel, Reuters reported.

One Polish pensioner drove 30 km (18 miles) from the mine in eastern Poland on Tuesday to buy several tonnes of coal.

“Toilets were put up today, but there’s no running water,” he said after three nights of sleeping in his tiny red hatchback.

“This is beyond imagination, people are sleeping in their cars. I remember the communist times but it didn’t cross my mind that we could return to something even worse,” he added.

Four million homes in Poland rely on coal for heating, which puts them in better shape than households in other European countries depending on gas, whose price rises by 10-20% daily.

Poland followed suit, banning purchases with an immediate effect in April, as the bloc mandated fading them out by August.

Although Poland produces over 50 million tonnes of its own coal every year, coal from Russia is much cheaper and is sold in lumps more suitable for home use.

The soaring demand has forced Bogdanka and other mines to ration sales in limited amounts.

Dorota Choma, a spokeswoman for the Bogdanka mine, told Reuters the mine planned to sell fuel for some 250 households and would continue sales over the weekend to cut waiting times.

Typically, most Polish coal mines sell most of their coal to power plants.

“But the main reason for the shortages is the embargo that went into immediate effect. It turned the market upside down,” he told Reuters.

Poland has been the most vocal critic of EU climate policy and staunch defender of coal, which generates as much as 80% of its electricity.

Meanwhile, in Germany, a top Green Party official suggested that Germans use washcloths instead of taking showers to solve the country’s looming energy crisis.

As The Daily Fetched reported earlier this month:

The comments were made in response to the energy crisis as gas shortages loom amid the ongoing war in Ukraine.

“Even the washcloth is a useful invention,” the Green politician told Südwest-Presse.

Kretschmann boasted about his eco-credentials, “I have an electric car, I have a huge photovoltaic system on the roof.”

They better start saving newspapers,cereal boxes and stuff like that to B**n too because they are going to need it.
NOW is the time to get on all the junk mail lists you possibly can! Think of all the heating fuel you’ll be getting in the mail over the months !

Bertram
Reply to  a a ron

Sign up with global warming activist groups.
They will bombard you with fundraising appeals. You will stay warm all winter.