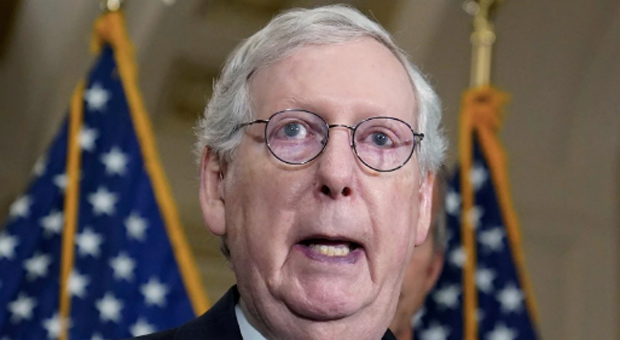 Sen. Mitch McConnell (R-KY), who personifies the need for term limits, will become the longest-serving party leader in Senate history on Tuesday.

80-year-old McConnell will remain the Republican minority leader in the 118th Congress, eclipsing the late Democratic Sen. Mike Mansfield’s time from 1961 to 1977.

The votes against “old crow” McConnell marked the first time he had received a “no” vote as a leader, signaling the tide is turning against RINO establishment Republicans.

“I don’t own this job,” McConnell claimed after the vote. “Anybody who wants to run for it can feel free to do so.”

McConnell will deliver a speech on the Senate floor as he becomes the longest-serving party leader – which will read in part:

“Designated party floor leaders have been a feature of the Senate for more than a hundred years. And no two have done the job exactly alike… [T] here’ve been leaders who rose to the job through lower-key, behind-the-scenes styles; who preferred to focus on serving their colleagues rather than dominating them. And that … is how Senator Michael Joseph Mansfield of Montana became the longest-serving Senate leader in American history until this morning.”

McConnell has faced former President Donald Trump’s wrath for working against conservatives in 2022.

Trump blasted McConnell after the RINO Republican claimed his “political clout has diminished.”

“If the Old Crow waited just 10 days, the Republican Majority in the House could have made the ‘Ominous’ Bill MUCH, MUCH, MUCH BETTER. Just another win for the Democrats, Mitch, that wouldn’t have happened if ‘Trump’ were President!” Trump wrote on Truth Social.

“The Omnibus Bill is an unmitigated disaster. Mitch McConnell pushed it through for the Democrats. So bad for our Country, so bad for the Republican Party!” Trump added.

McConnell has been actively working against conservatives and MAGA.

He also supported gun control measures and even refused to condemn Biden’s speech which labeled “MAGA Republicans” as terrorists.

McConnell is the reason term limits are needed.

The Senate Republicans should be ashamed of themselves. McConnell needs to be replaced immediately. His disgraceful conduct during the midterms (withdrawing support from certain Trump-endorsed candidates, his allocation of funds to the Alaska primary in order to defeat the Murkowski challenger, etc.) show that he is unfit to lead the Senate Republicans. I hope that there is a way that he can be replaced in the near future.