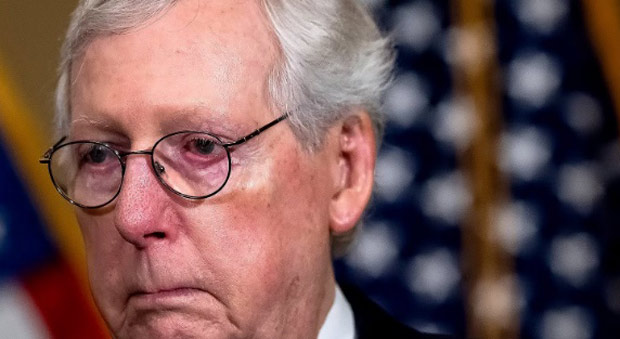 RINO Mitch McConnell is the United States’ most unpopular senator, according to a Wednesday Morning Consult poll.

McConnell was followed by Democrat defector Sen. Kyrsten Sinema (I-AZ), who came second most disliked in the nation.

McConnell (R-KY) is the longest-serving party leader in Senate history.

The 80-year-old RINO remains the Republican minority leader in the 118th Congress, eclipsing the late Democratic Sen. Mike Mansfield’s time from 1961 to 1977.

That’s not to mention Obamacare, enacted om 2010, Banks being bailed out in 2008, and social media companies censoring free speech with zero repercussions.

McConnell also approved $100 billion in aid for Ukraine in 2022.

Sinema is up for reelection in 2024, which could have driven her to change her party affiliation to independent.

After Sinema left the party, Sen. Chuck Schumer allowed her to flip her affiliation without disciplinary action. She will still caucus with the Democrats and retain her Democrat-designated committee seats.

The poll also found Sen. Joe Manchin (D-WV), who voted for has a national approval rating of only 40 percent. Fifty-three percent disapproved.

Former Sen. Judd Gregg (R-N.H.), a onetime adviser to McConnell’s leadership team, said McConnell is going to have a tough 2023.

“McConnell becomes the responsible individual on the Republican side who’s going to make the government work,” Gregg said. “The debt ceiling is just one element of that but it’s a big one.”