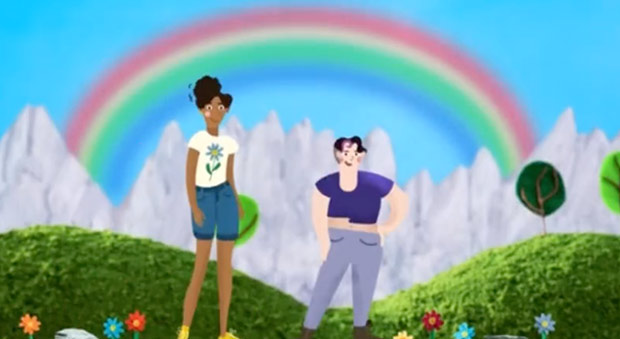 Planned Parenthood has gone beyond its abortion advocacy with a new cartoon aimed at promoting puberty-blocking pharmaceutical drugs to children.

The video was shared by the conservative group, Inside the classroom, which has been instrumental in exposing critical race theory and efforts to indoctrinate school children.

“There is no one size fits all puberty experience,” the video says.

“Some people decide on hormones or surgeries to help their bodies match up to their gender identities or how they feel inside about themselves.”

“Your gender identity is real. You should be the one to decide what changes you want to make to your body.”

“If you’re transgender or nonbinary, you may find that your puberty experiences don’t line up with your gender identity. That feeling can be uncomfortable, scary, and stressful. If that sounds like you, know that you’re not alone,” the video further claims before launching into a push for ‘safe’ puberty-blocking drugs,” it adds.

“There are medicines you can take to delay puberty for a while,” the video proclaims, adding, “they work like a stop sign, by holding the hormones testosterone and estrogen that cause puberty changes like facial hair growth and periods.”

“Puberty blockers are safe and can give you more time to figure out what feels right for you, your body, and your gender identity,” the video continues, failing to provide any detailed facts.

According to the American College of Pediatricians, “There is not a single long-term study to demonstrate the safety or efficacy of puberty blockers, cross-sex hormones, and surgeries for transgender-believing youth.”

But in the short term, the drugs have been linked to confusion, depression, and other mental and emotional problems.

The Family Research Council notes that studies concluded the drugs do nothing to solve gender confusion, a natural state of mind most children eventually outgrow.

Other longer-term studies suggest the drugs could cause sterilization, cognitive problems, increased body fat percentage and body mass index, and arterial hypertension, amongst other things.

well, as awful as it sounds, but seems puberty is coming earlier and earlier in the last decades. Even 9-years old girls having already their periods, when they are still children and prefer to play with their toys. How do you explain this to a kid, that its body is developing faster than their brains and mind?
I know from the elder generations, that in the old days physical puberty usually came much later than today. So what has happened here?

It is probably the toxic s**t in our food is to blame for that, hormones and such c**p.
So, pharma-mafia is now offering some drug against someting they probably caused themselves in the last decades.

And for that “trans”issue – well, this is just a very very small part of the people, who are really trans. Others might just be confused while growing up – but later feel fine as they are.
But those few, who in the end really might turn out as “trans” – for them it is neither fun nor a “lifestyle”. They do not have a “choice”.
For such a “trans kid” puberty is traumatic. They hate to see their bodies change in a way they cannot stand. They feel they are becoming an alien.
They all would prefer just to be “normal” and not “trans”. This is something people have to understand. It is not a choice. they are born with that – like other people, who are a bit weird -autists or aspergers or other people with strange birth defects and identity failure.

Maybe it is a brain damage from birth. So we shall treat it in a medical way and not as a matter of choice or lifestyle. I hate it when those LBGQ-activists are abusing those poor and sick people for their own selfish purposes. Most trans people are not loud and coulourful and confident. Most are just hiding in the shadows. Many are comitting suicide in puberty.

And so I guess, as much as I despise them – here those lefties are right:
Maybe for some (very few) kids those “blockers” are not a bad idea, until they really know what they want. Or, as I doubt they will ever know – this just would give them a few more years as a “child” without having to deal with bodily changes they are not appreciating.

I guess not many will really “change” their s*x or get that surgeries done and things like that. But their brains will get a bit more time to grow and think about what they want – or maybe just find a way to arrange themselves with their destiny – and their bodies. It is easier, when you are a few years older than when you are just a young child.

No wonder people used to blow them up in the 80s.