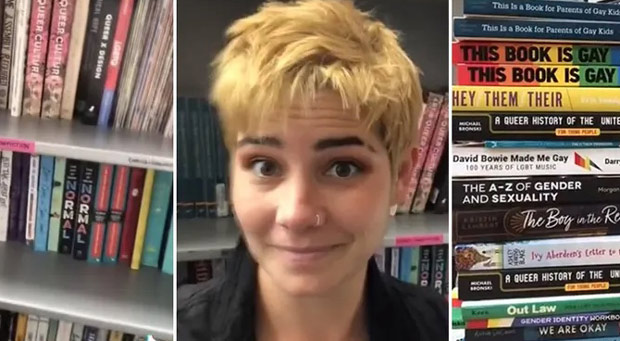 The teacher is identified on the school’s website as Danielle Serio – otherwise known as “Flint.”

Flint posted about books in the “queer library” on TikTok, saying it was available to students and has been active for five years.

Due to the highly sexually-explicit nature of the books, many of the details covered have been withheld from the story.

One of the books, “Juliet Takes a Breath” by Gabby Rivera, contains highly graphic imagery of sex between women.

“I find the BDSM/kink community to be extremely open-minded and welcoming in every way; it’s a place of sexual liberation,” the book states.

“There is often more blanket level of acceptance of transgender people within the kink/BDSM (bondage and discipline, dominance and submission, sadism and masochism) scenes and sites such as FetLife.”

FetLife is a social media networking site for the “kink community.”

“We all want to have sex with loads of people,” the book states. “[T]he prostate gland… feels amazing when massaged. Lots of men, gay or straight, like how this feels.”

“Saunas, or ‘bath houses,’ are dotted all over the country, and they are perfectly legal. People (many saunas run lesbian nights) pay some money to enter and then have a bit of a sauna and some random sex. Again, this is fine as long as you’re safe.”

Flint even interviewed the school’s principal at San Juan Hills High, Dr. Manoj Mahindrakar, and posted it on TikTok.

Flint asked the principal whether he thought “it’s important to have a queer library on campus,” He said, “In my educational experience, books are always a good thing, and any books that support our students, I’m for.”

Another book, “The A-Z of Gender and Sexuality,” also delves into kink and fetishes as well as “tucking” – the process of hiding one’s penis and “whorephobia” – a stigma against sex workers.

Flint said the teacher gets the books mainly through donations and included a link to an Amazon page so that the books could be purchased from donors.

When Flint was asked by a TikTok user why “queer library” books are not in general circulation in the school,” Flint said, “The library has some of these titles but getting them ‘into circulation’ is pretty challenging.”

“I’ve been wondering lately why it’s so hard for so many people in the general public to trust educators about education – the thing that we studied and do every day. It’s been so long since they were in school, I’m wondering if they have extreme or outdated views about what’s happening in the classroom,” Flint said.

California Decriminalizes Jaywalking Because of ‘Racism’