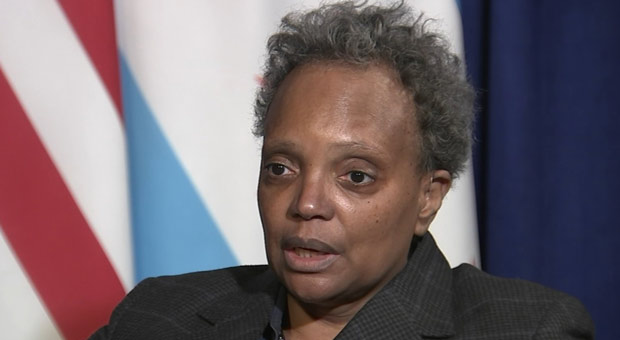 Chicago Mayor Lori Lightfoot shot back at McDonald’s CEO Chris Kempczinski after he highlighted the rising crime in the city, telling him he needs to “educate himself.”

“I think what would have been helpful is for the McDonald’s CEO to educate himself before he spoke,” the Chicago Democrat said.

In a recent speech at the Economic Club of Chicago luncheon, Kempczinski warned it was time to “face facts” and acknowledge that companies are leaving Chicago due to soaring crime.

“The fact is that there are fewer large companies headquartered in Chicago this year than last year,” Kempczinski said.

Kempczinski added that the city’s crime is affecting his company’s ability to recruit top talent, and employees have been hesitant to return to work.

But Lightfoot also pointed to a letter from World Business Chicago President Michael Fassnacht that she says “lays out in exact detail all the good news, economic news, about what’s happening in our city.”

“I’m going to focus on those things and not the comments of CEO of McDonald’s,” Lightfoot said.

Meanwhile, several high-profile companies have announced they are leaving Chicago, citing rising crime as a factor in the decision.

Last month, Lightfoot claimed that Chicago has been investing in ways to prevent gun violence in the city, arguing it’s playing a role in a downward trend in crime.

“And this, to us, is a very big deal, we are grateful for the recognition.”

There is still no evidence for Lightfoot’s claims.

Major Beetlejuice needs to consider the rate at which people are leaving Chicago. It’s okay, we have some replacements on the way…..

I’m going to focus on the one building still standing and not the 300 that have been burned to the ground.

“We rank 3rd among 50 U.S. cities for violence prevention programs, services and policies,” says Lori Lightweight. Probably ranked about last in these programs having any effect in actually reducing violence.

Ahh to be a liberal where you get points for effort and not results. No one cares, except those benefiting financially, about being 3rd in “violence prevention programs” if it is still too violent for people to be safe.

“And this, to us, is a very big deal, we are grateful for the recognition.” A nice summary of precisely what is wrong. Admiral Ackbar and her city get recognition, a participation trophy, so they can pretend they are doing a great job and then lie to your face. Her citizens get headstones.

In the words of a splendid advertisement (The Scream) that Chicago local television refuses to air, “how bad does it have to get?”

That this little outburst by Mayor Ackbar is aimed at the CEO of MacDonald’s offers a chance for an interesting comparison.

Imagine that five or six MacDonald’s customers in Chicago were dying every weekend from food poisoning. Now imagine further that the response from the CEO was to create a plan to reduce the rate of poisoning and d***h. Imagine further that despite his plan, deaths continued. Now CAN you possibly imagine 1) that anyone would decide that his plan was great, deserving or recognition, ranking among the best anti-food-poisoning plans around? Or 2) that he would stand in the midst of poisoned customers and brag about what a great plan he has? Or 3) that he would keep his job?

People of low character only like for their “praised”, not criticized (even constructively). The mayor needed to heed the CEO’s speech; instead, she dismissed it.

I would like to point out that under Mayor Beetlejuice there has not been a single tidal wave hit Chicago. Nor have there been any elephant stampedes. (Not counting black Friday at the Walmarts). No Earthquakes or fires. It just shows you her policies are working by showing the country that Chicago is so bad, that even natural disasters stay away.

Lightfoot’s response is the perfect illustration of what is wrong with her so-called “leadership.” It’s called DENIAL.

World Business Chicago? Is that like their version of the local Chamber of Commerce?

Mayor Beetlejuice thinks prevention programs work🤷‍♀️
The only way prevention works, if that’s even possible, is IF the people causing the crimes “want to get better”. Yeah, I don’t see that happening

Left-Leaning 'The Breakfast Club' Hosts Stunned as Callers Say "I'd Rather Have Trump" than Biden
Hosts of Charlamagne tha God’s left-leaning ‘The Breakfast Club’ were left stunned...
No posts found
wpDiscuz
16
0
What are your thoughts? Click to commentx
()
x
| Reply