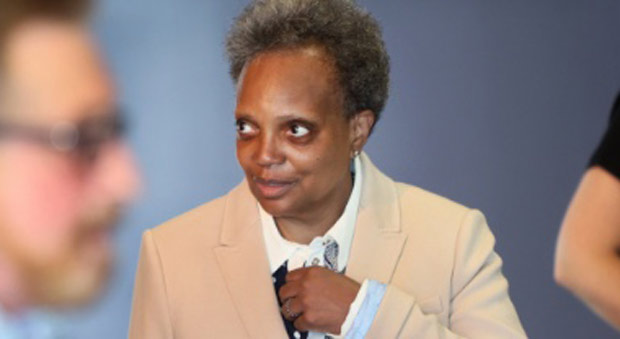 Lightfoot currently takes home an annual salary of $209,915, but the Mayor now demands an increase of up to 5 percent each year.

The ordinance announced on Wednesday it would give Lightfoot, city clerk, and treasurer access to a pay increase each year.

This would mirror the process used by aldermen who are already eligible for the pay rise.

“To be clear, the ordinance that was introduced today would put the Mayor, the city treasurer, and the clerk in line with all the other elected officials regarding a cost of living increase,” Mayor Lightfoot said.

“It’s not a salary increase, I want to make sure that’s clear, and it puts us in line with the aldermen. It would not go in effect until 2024 at that point, and each member, the Mayor, the clerk, and the treasurer would have the ability to opt-in or opt-out,” she said.

The pay increase comes as violent crime in Chicago have increased by 37 percent since last year.

Shootings in the city are up from the previous weekend when nine murders and 31 victims were reported.

Last weekend, a total of 51 people were shot in Chicago, with some 11 victims dying in the 43 separate incidents – nine of the victims being juveniles.

One of the shootings over the weekend involved a bullet scraping the face of a 14-year-old boy on a playground.

Just hours after the incident, a 16-year-old was shot and killed by two men in a sedan.

On the same evening, a 2-year-old was shot in the chest by a random gunman in a gray sedan in South Albany.

Meanwhile, a 17-year-old boy was shot in the head while walking in the South Commons neighborhood; he is reportedly in stable condition.

Lori Lightfoot vowed to tackle the city’s crime rates after she was sworn into office in May 2019, but up to now, she has failed.

The Chicago mayor also made a massive U-turn on her proposal to cut $59million from the Chicago Police Department’s budget amid the defund the police’ protests in the summer of 2020.

Despite Lori Lightfoot denouncing the ‘defund the police’ movement, Chicago’s police union has since issued a vote of ‘no confidence in the Mayor.

A ruse to give themselves a pay raise.

“It’s not a salary increase, I want to make sure that’s clear,…”

So…you get an additional 10,450 per year, $870 per month, but it is NOT a salary increase, did I understand that correctly? And Hunter Biden’s laptop was disinformation, did I get that right, too? And the COVID shutdown was two weeks to stop the spread? And the 2020 election was the freest, fairest, bestest election ever, because Joe Biden got 15 million more votes than Barry Obama without hardly campaigning at all. And there is no crisis at the border. And we are NOT in a recession. And ;inflation was zero in July. Did I get all that right?

Fellow citizens! Hard enough yet? Fed up yet? If not, HOW BAD DOES IT HAVE TO GET? Please for the sake of every one of us, but especially for the future of your grandchildren, THROW THE BUMS OUT!

This betch has 24/7 armed cops guarding her.