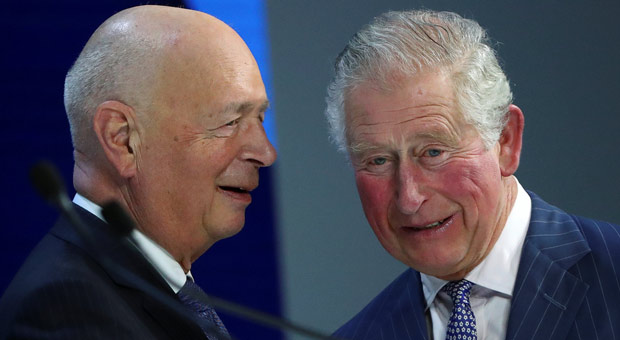 King Charles III, who ascended to the Royal British throne following the death of his mother, Queen Elizabeth II, is yet to show the world how he plans to fulfill the new role – not just in the U.K. – but in 14 other Commonwealth realms including Australia and Canada.

King Charles, a proud member of the World Economic Forum, is actively present fight against “climate change” while publicly advocating the “great reset.”

This is what King Charles said at the launch of the WEF’s ‘Great Reset’ event in 2020:

“There is a golden opportunity to seize something good from this crisis…global crises know no borders, and highlight how interdependent we are as one people sharing one planet.”

“Unless we take the action necessary, and build in a greener and more inclusive and sustainable way, then we will have more and more pandemics.”

The WEF Annual Meeting in 2020 brought together global leaders from government, business, and civil society, as well as stakeholders from around the world, to convene in in-person and virtual dialogues, the WEF writes on its website.

The global initiative, “The Great Reset,” was launched by The Prince of Wales, the WEF, and HRH’s Sustainable Markets Initiative in 2020.

On the official Prince of Wales website, it reads:

For over fifty years, His Royal Highness has promoted action for a sustainable future to ensure that the natural assets can endure for future generations.

In January 2020, The Prince launched his Sustainable Markets Initiative at Davos, calling communities, businesses, investors, and consumers to take the urgent and practical steps required to transition to more sustainable practices.

The Great Reset, which was launched during a virtual roundtable today, aims to rebuild, redesign, reinvigorate and rebalance our world. It has been designed to ensure businesses and communities’ build back better’ by putting sustainable business practices at the heart of their operations as they begin to recover from the coronavirus pandemic.

So, with that in mind, it’s also worth noting what other strategies are outlined by the WEF to take humanity to a new “safe” and “sustainable” future.

As we reported last month, Klaus Schwab’s World Economic Forum published an article suggesting it would be “solid” and “rational” to microchip children.

A blog post on the WEF website focuses on the future of augmented reality and an “augmented society.”

The article reads: “As scary as chip implants may sound, they form part of a natural evolution that wearables once underwent. Hearing aids or glasses no longer carry a stigma.”

“They are accessories and are even considered a fashion item. Likewise, implants will evolve into a commodity,” Philips writes.

In August, the WEF revealed its plan to combat “disinformation and hate speech” by using “human and artificial intelligence” in the group’s so-called battle against “the dark world of online harm.”

One solution would enable a combination of A.I. and “subject matter experts” to “detect nuanced, novel online abuses at scale before they reach mainstream platforms.”

Goldberger adds the A.I. approach to content moderation would allow human and A.I. teams to flag and remove items deemed high risk after transmitting millions of sources through training sets.

Here is what The World Economic Forum writes on its website:

To address this impending crisis, world experts and leaders will meet this autumn at the U.N. Food Summit and then the COP26. Often overlooked in these discussions is the potential role insects can play in helping meet this challenge.

As we reported in July, Experts accused The World Economic Forum (WEF) of being behind the global attack on farmers, most notably in Holland and the United States, as the United Nations’ “Agenda 2030” Sustainable Development Goals make headway.

The U.N.’s 17 Sustainable Development Goals (SDGs) are sown inside policies that are currently waging war on farmers and food supplies worldwide.

As the Epoch Times noted, the global plan is being helped by Chinese Communist Party (CCP) members within the U.N. system, who also assisted in creating the SDG.

Experts say that millions of people worldwide are facing dangerous food shortages, and it is set to get worse.