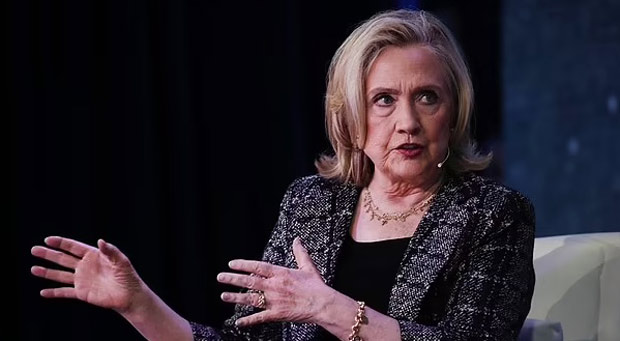 Twice failed presidential candidate Hillary Clinton compared supporters of President Donald Trump to “Nazis,” in an attack similar to her “basket of deplorables” comment in 2016, which cost her the presidential election.

She still hasn’t learned her lesson.

During an appearance at the Texas Tribune Festival in Austin on Friday, Clinton criticized the so-called hand gesture made by many Trump supporters at a September 17 event Trump attended for GOP senate candidate J.D. Vance.

Clinton also spoke about her years as a student trying to figure out why people were drawn in by Hitler.

“I remember as a young student, you know, trying to figure out how did people get basically drawn in by Hitler. How did that happen?” Clinton said.

“I’d watch newsreels, and I’d see this guy standing up there ranting and raving, and people shouting and raising their arms. I thought, ‘What’s happened to these people?” she continued.

“You saw the rally in Ohio the other night, Trump is there ranting and raving for more than an hour, and you have these rows of young men with their arms raised,” Clinton said.

“As usual, the media is working hand in hand with the Democrats weeks before an election,” said spokesman Taylor Budowich.

Trump spoke at his September 17 rally:

“My fellow citizens, this incredible journey we’re on together has only just begun, and it is time to start talking about greatness for our country again. We are one movement, one people, one family, and one glorious American nation,” Trump said.

Clinton made similar remarks during an LGBT fundraiser in Manhattan on September 9, 2016, when she called Trump’s supporters a “basket of deplorables.”

“To just be grossly generalistic, you can put half of Trump supporters into what I call the basket of deplorables,” Clinton said. “Right? Racist, sexist, homophobic, xenophobic, Islamaphobic – you name it,” she said.

“And unfortunately, there are people like that and he has lifted them up. He has given voice to their websites that used to only have 11,000 people, now have 11 million. He tweets and retweets offensive, hateful, mean-spirited rhetoric,” she said.

Clinton quickly apologized the next day after suffering massive blowback.

“Last night I was ‘grossly generalistic,’ and that’s never a good idea. I regret saying ‘half’ — that was wrong,” Clinton said in a statement.

“I think this is the biggest mistake of the political season,” Trump said on ‘Fox and Friends on September 12, 2016.