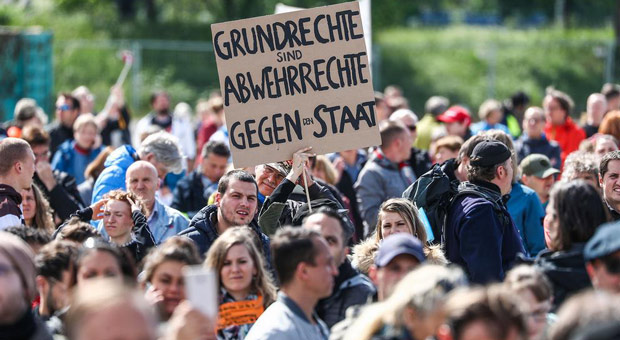 German authorities have fined a man more than $17,000 for insulting two German pro-lockdown politicians during the COVID pandemic.

The 34-year-old engineer was fined over $16,000 by a district court on Monday after being found guilty of sending an email to a government department insulting two pro-lockdown politicians by name.

Despite the world largely moving on from the threat of the virus, Germany continues to impose some lockdown rules, with mask mandates remaining on most public transport.

During the height of the COVID restrictions, German police cracked down on protests while strict laws were introduced to limit free speech.

The man described the politicians as “mendacious, corrupt, power-hungry, characterless and dishonorable creatures,” calling them “sons of bitches”, “complete idiots,” and “professional criminals.”

The man is reported to have written that he would neither allow himself to be vaccinated nor pay any fine for failing to get a Covid jab – in reference to the fact that Söder was in favor of mandatory vaccination being implemented in Germany at the time.

The hefty fine handed to the man stands in sharp contrast to Germany’s lax attitude towards militant climate protesters, a significant number of whom have taken to blocking roads and vandalizing art and buildings in the name of the green agenda.

Although there have been increasing warnings from various experts that the ongoing militant protests could drift towards terrorism, authorities in Germany have opted to hand extremely light sentences to those found guilty of breaking the law with their climate activism. Germany’s left-wing Federal Government has so far resisted calls to implement a law allowing for stricter sentencing of road-blocking climate activists despite the protest being linked to the death of one woman.

According to reports, the female cyclist had been involved in a traffic accident.

Still, due to emergency services being delayed by climate activists, she died after being pronounced brain-dead the following week.