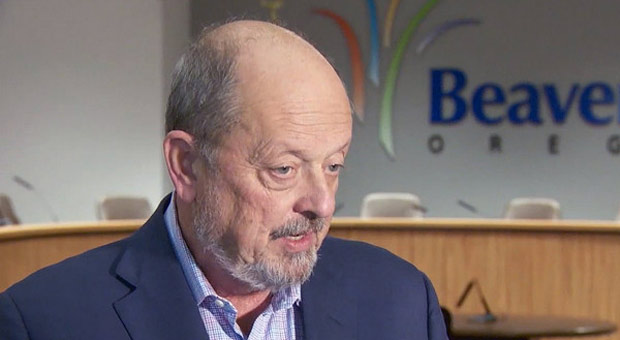 The former Democratic mayor was in possession of images of children under age 12, who were known victims of sexual exploitation, the DOJ said.

Doyle’s sentencing is scheduled for January 2023.

The former mayor could face a maximum sentence of 20 years in federal prison, a life term of supervised release, and a $250,000 fine.

When Doyle left the courtroom, he told reporters, “You know, we make mistakes,” Townhall reported.

He was charged with possessing the materials from November 2014 to December 2015.

The FBI Portland’s Child Exploitation Task Force was investigating the case and prosecuted by the U.S. Attorney’s Office for the District of Oregon.

Under the plea agreement, Doyle would also have to register as a sex offender.

The judge informed Doyle that he’s not bound by the recommendation.

Doyle waived an indictment and entered a plea to the single charge from a criminal information. By pleading guilty to the felony charge, he won’t be allowed to possess a firearm, vote or hold public office, the judge told him. In Oregon, though, his voting and public office restrictions are limited to his period of incarceration, according to state law. Oregon is one of 21 states where felons forfeit their voting rights or right to hold public office only while incarcerated and receive automatic restoration of those rights upon release, according to the National Conference of State Legislatures.

Doyle was elected mayor of Beaverton in 2008, following 14 years on the city council. He left his position in January 2021.

Doyle was named Citizen of the Year by the Boy Scouts of America in 2008, recognized for his longtime community service and work with youth sports.

He also sat on the Tualatin Hills Park & Recreation District’s board and on school committees for Beaverton High School and Sexton Mountain Elementary School.

“Not only do these images and videos document victims’ exploitation and abuse, but when shared across the internet, child victims suffer re-victimization each time the image of their abuse is viewed.”

Everyone knows the morally depraved democrats are a cesspool of pedophiles, their actions prove it everyday.
If they are not killing babies in the womb they are mutilating elementary kids’ genitals and grooming them for s*x with adults.
The democrats should all be in jail for child abuse!

He watches the MSM and listens to liberals speak, giving him the idea that it was now acceptable behavior from adults in America, and thought there was nothing unusual about his actions.