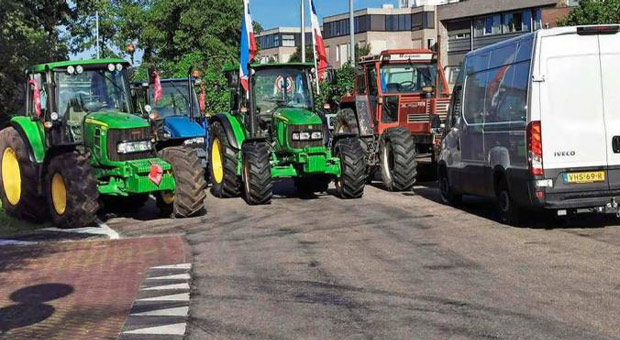 A group of Dutch farmers used their tractors to block the entrance to a paper factory in protest of the “double standards” of the global green agenda pushed by the government.

The farmers blocked the entrance to Parenco paper mill in the Eastern Netherlands on Wednesday in protest the double apparent hypocrisy of the government’s green agenda.

The paper mill wasn’t subject to the exact nitrogen emissions requirements currently being imposed on the farmers at the hands of PM Mark Rutte.

Farms in the Netherlands are forced to reduce their nitrogen output by 70 and 95 percent by 2030 to comply with the European Union’s Natura2000 agenda.

The agenda, which experts say is being facilitated by The World Economic Forum, seeks to classify vast swaths of land as “protected environments” to shut down the farming industry.

Critics say the plan is nothing more than a “land grab” in the guise of the EU programme.

The farmers said Wednesday’s protest was not an attack on the paper mill but merely to emphasize the hypocrisy of the government’s green agenda, as local broadcaster Omroep Gelderland reported.

According to one farmer, the location was chosen “because there is a Natura2000 area to the left and right of the Parenco [paper mill]… We have to comply with the rules, but nitrogen is just being emitted here.”

Among the companies emitting high amounts of nitrogen oxides in the country, the paper factory ranked 54 and was a top emitter in the province of Gelderland.

Eventually, the tractor blockade was lifted after a conversation between the farmers and the mayor of Renku.

On Wednesday, there was more disruption as Police forcefully cracked down on protests from a Dutch farmer group over the removal of a mural in the city that featured the inverted Dutch flag.

The reversed flag has become a symbol of the farmer protest movement and is seen as a defiant opposition to the globalist ‘green agenda.’

But Mayor Arjen Gerritsen ordered the removal of the mural.

Local broadcaster RTV Oost reported that the protesters arrived to defend the mural, which was painted on a wall near the town hall of Almelo.

The slogan, “no farmers, no food,” was also featured on the mural, referencing the green agenda that globalist PM Mark Rutte is attempting to impose on the country.

There was also widespread chaos after protesters dumped animal manure and flaming bales of hay on motorways.

Dutch Prime Minister Mark Rutte has refused to cut his vacation short despite the ongoing chaos of the protests.

She said that Rutte “has ruined the country beyond recognition, taking away people’s private property for a nitrogen crisis? That little game of creating a crisis and taking your rights away… people are waking up to that.”