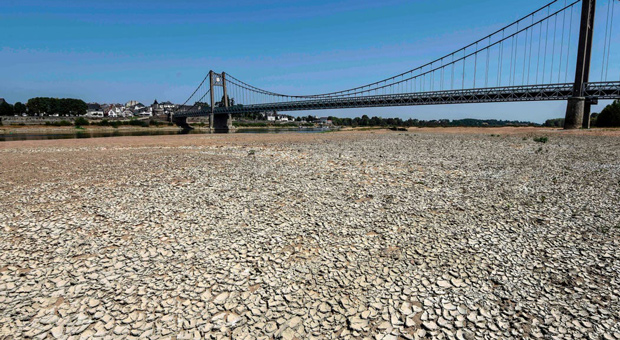 Towns across France are facing severe drought conditions as they are forced to rely on water truck deliveries water for survival.

As of writing, at least 100 towns and villages have now run out of water.

The French government has now stepped in to support drought-stricken areas.

French environment minister Christophe Bechu weighed in on the dire situation, saying in dozens of municipalities, “there is nothing left in the pipes,” referring to systems that pump fresh water that has run dry.

Bechu called the crisis “historic,” which has resulted in water truck deliveries to help towns in need.

The severe economic consequences of the drought, affecting 60% of the EU, will hammer energy production, agriculture, and river transportation.

The European Union’s Copernicus Climate Change Service noted that the record heat has “increased fire danger due to the lack of rain and the resulting dry vegetation, combined with high temperatures.”

As we reported last month, a firefighter in France admitted to starting several fires this year, causing significant damage to land and forests as temperatures soared to more than 40°C (104°F) between May and July.

The 37-year-old volunteer fireman said he started the fires for the “adrenaline” and to get away from his family.

French police arrested the firefighter last Wednesday near the site of several fires in the commune of Saint-Jean-de-la-Blaquière.

A day later, he admitted he had set fires in May in Saint-Privat.

Zerohedge highlighted in a recent report that French utility Electricite de France SA had to “reduce or halt nuclear output” due to record-breaking heat on the Rhone and Garonne rivers, making the water too hot to circulate through condensers and return into waterways.

French power prices also hit a new record of over 600 euros per megawatt hour due to the lack of nuclear power generation because of the massive demand during the heatwave.

Electricity prices in Germany and France, Europe’s biggest power markets, surged to a record on Tuesday, as natural gas jumped as much as 21.5% and coal futures for next year hit an all-time high. That’s leaving Europe without vital fuel to keep the lights on at a time when countries race to secure energy ahead of winter.

Higher energy prices in Europe could translate into more pain for households, businesses and industry already battered by soaring living costs caused by the highest inflation levels in decades. Germany, Europe’s biggest economy, has already triggered two stages of its gas emergency plan and could enact the last step if there’s a clear deterioration in the situation.

Say, can’t those hundreds/thousands of windmills be ‘force-fed’ to cool things down? How about having the politicians blow their…wait…that’s hot air…

Your “awaiting for approval” tag is incorrect English. The term is “awaiting approval”.

OBVIOUSLY caused by US yuppies driving Ford Explorers in the 80’s and 90’s!