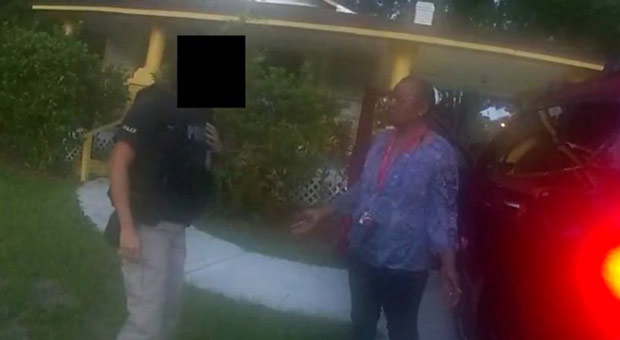 Registered Democrats were among those arrested in Hillsborough County, Florida, for allegedly casting a ballot illegally as officials crack down on voter fraud.

The arrests, performed by state police and local officers, took place earlier this year in August, and among the 19 arrested were 12 registered Democrats.

The group faces up to five years in federal prison for allegedly registering and voting illegally.

The video shows Tampa Police officers arresting the convicted felons who appear confused and stunned after being caught for alleged voter fraud.

RELATED: Trump on 2020 Election ‘Fraud’: Declare Me the ‘Rightful Winner’

“I voted, but I ain’t commit no fraud,” Romona Oliver can be heard saying on police body cam video obtained from the Tampa Police Department.

“I got out. The guy told me that I was free and clear to go vote or whatever because I had done my time,” she said.

As The Times reported:

They are accused of violating a state law that doesn’t allow people convicted of murder or felony sex offenses to automatically be able to vote after they complete their sentence. A 2018 state constitutional amendment that restored the right to vote to many felons excluded this group.

But, as the videos further support, the amendment and subsequent actions by state lawmakers caused mass confusion about who was eligible, and the state’s voter registration forms offer no clarity. They only require a potential voter to swear, under penalty of perjury, that they’re not a felon, or if they are, that their rights have been restored. The forms do not clarify that those with murder convictions don’t get automatic restoration of their rights.

DeSantis said during his State of the State address earlier this year, “This will facilitate the faithful enforcement of election laws and will provide Floridians with the confidence that their vote will matter.”

According to state law, the Florida Department of State aims to “identify those registered voters who have been convicted of a felony” and “notify the supervisor and provide a copy of the supporting documentation indicating the potential ineligibility of the voter to be registered.”

White House press secretary Karine Jean-Pierre responded to the footage saying, “The president believes that people who are not incarcerated for a felony should have their voting rights restored automatically.”

“[The president] has repeatedly called on the Senate to pass comprehensive voting rights legislation that would do just that,” she added.