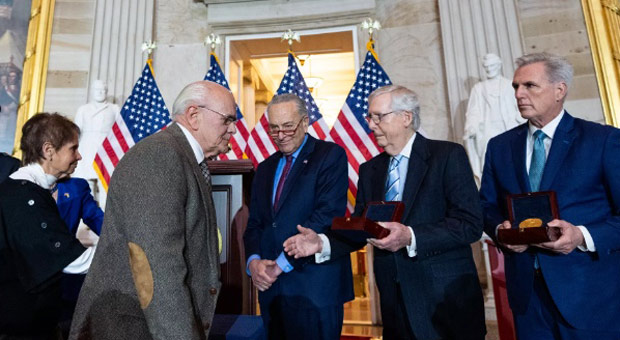 The family of a deceased Capitol Police officer who died a day after the January 6 riot refused to shake Senate Minority Leader Mitch McConnell’s hand during a ceremony honouring law enforcement officers.

Despite initial media reports, Sicknick did not die during the Capitol Hill riot, but a day later, he suffered multiple strokes.

After the ceremony, Ken Sicknick, Brian’s brother, told CBS News that Republican leaders “have no idea what integrity is.”

“They came out right away and condemned what happened on January 6, and whatever hold that Trump has on them, they’ve back-stepped, they’ve danced, they won’t admit to wrongdoing, not necessarily them, themselves, but of Trump, of the rioters,” said Ken Sicknick.

“I mean, people like Louie Gohmert, who presented an American flag that was flown over the Capitol to a January 6 rioter and told them they were a patriot. It’s disgusting. Takes away everything my brother’s done. Takes away the heroism my brother showed,” he added.

“You don’t think they deserved a handshake in this context?” the reporter asked.

“No,” both Ken Sicknick and his father responded.

Ken Sicknick then sang the praises of Republican Liz Cheney.

“Unlike Liz Cheney, they have no idea what integrity is; they can’t stand up for what’s right and wrong. Liz gave up her political career to do what was right,” he said.

Mitch McConnell condemned the January 6 rioters, earning a standing ovation when he returned to the Senate to certify the presidential election.

McConnell even accused President Donald Trump of “provoking” the mob despite the former president calling for peace and respect for law enforcement.

“The mob was fed lies,” McConnell said on the Senate floor.

“They were provoked by the president and other powerful people. And they tried to use fear and violence to stop a specific proceeding of the first branch of the federal government, which they did not like.”