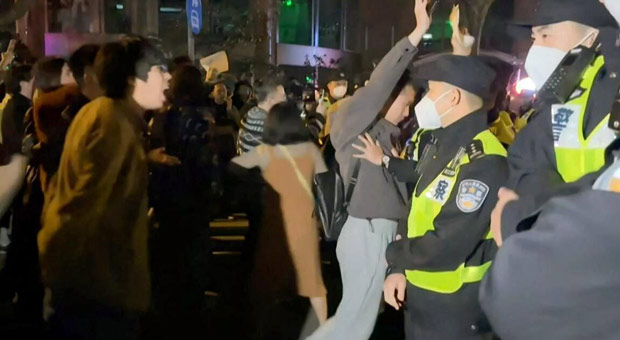 At least seven cities saw protests, including Shanghai, Nanjing, and Guangzhou, as local cops and furious protesters faced off in the streets.

Officers used pepper spray against thousands of protesters, according to reports.

Last night, hundreds gathered to mourn the deaths of at least ten people who lost their lives in an apartment fire in Urumqi in the Xinjiang region after being locked in their buildings to try to stop the spread of COVID.

The news comes as China launched another brutal crackdown on the virus with crippling lockdowns.

Another 39,791 new cases of the virus were reported, the biggest one-day increase on record, with a record 4,307 in Beijing alone.

Meanwhile, the uprising forced authorities in the far western Xinjiang region to open up parts of the capital Urumqi.

Some have also claimed lockdown measures hampered rescue efforts and the ability of residents to escape buildings in an emergency.

There are also reprots of isolation camps being built all around China as protests rage around th country.

Online footage showed hundreds of demonstrators confronting riot police in Urumqi, where many of the four million residents have been prevented from leaving their homes for as long as 100 days, the Daily Mail reported.

In another video, protesters can be heard chanting “take down the CCP.”

President Xi Jinping’s government’s ‘zero-COVID’ policy has caused fury among residents, as access to areas throughout China has been shut down.

The ruling Communist Party faces growing backlash about the economic and human cost as businesses close, and families have h limited access to food and medicine.

One video shows a man screaming at police: “Whose children are you, and whose father are you? Don’t you have a conscience? How many people died today?”

Some videos show demonstrators singing China’s national anthem, which includes the lines is: “Rise up, those who refuse to be slaves.”