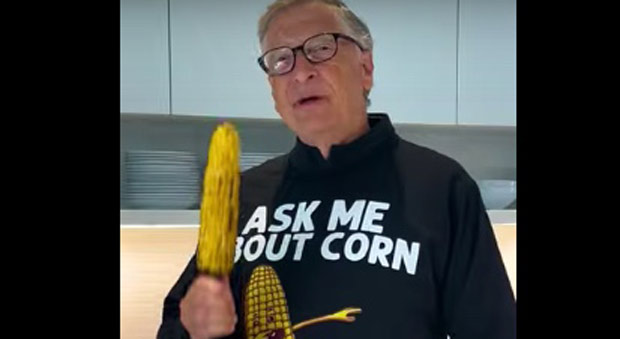 As the world teeters on the brink of a global food crisis, billionaire Bill Gates is posting creepy videos promoting genetically modified corn while miming to a child’s voice.

In the video, Gates lip-syncs the lyrics to the song, which sampled a child’s voice talking about corn as Gates stands in a kitchen wearing t-shirt that says, “Ask me about corn.”

“It’s corn!” Gates exclaims as he bites the corn ear. “It has the juice!”

The painful 27-second video also features Gates as a child holding a corncob in a corn field.

The video captions: Corn “accounts for 30% of the food consumed in Africa. But it is at risk. African crop researchers are creating a new, more resilient type of corn.”

The video is another apparent attempt by Gates to condition the public to accept the Great Reset agenda, which is hellbent on destroying the farming industry.

The sixth annual Goalkeepers Report – published by The Bill and Melinda Gates Foundation – highlights how the United Nation’s Sustainable Development Goals, food security, and gender equality are being achieved.

The reports also boast about “magic seeds,” crops including corn and rice that have been genetically modified to resist drier climates and droughts like much of the West has been experiencing over the last year.

“Of course,” Gates writes, “the seeds weren’t actually magic, but by breeding select varieties of the crop, the researchers believed they could produce a hybrid maize that would be more resistant to hotter, drier climates. They succeeded wildly.”

As we reported earlier this year, Gates has been buying up vast chunks of American farmland while investing in farming technology, including a type of corn seeds that thrive at higher temperatures and in drier conditions, known as DroughtTEGO.”

“The seeds were first developed under a program of the African Agricultural Technology Foundation, to which the Gates Foundation has given $131 million since 2008,” the Daily Mail reports.

In a recent interview with MIT Technology Review, Gates said, “all rich countries should move to 100% synthetic beef” in an effort to cut down pollution.

“You can get used to the taste difference, and the claim is they’re going to make it taste even better over time,” Gates said.