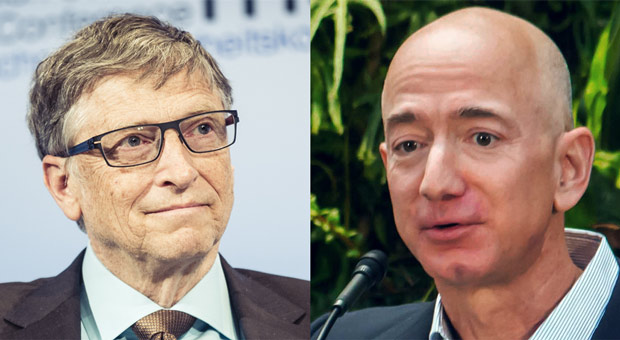 On Thursday, brain computer interface company Syncron announced it had received $75 million for its latest round of funding.

A large amount of that investment came from Bill Gates and Jeff Bezos.

This is Synchron’s goal, as per Fortune:

Synchron is focused on restoring some helpful capabilities to paralyzed patients, who can use its Synchron Switch, a brain computer interface (BCI), to move a computer cursor on a screen with just their thoughts. With a minimally-invasive procedure, the BCI is implanted in the blood vessel on the surface of the motor cortex of the brain via the jugular vein. Other companies, including Neuralink, use more invasive techniques that involve going through the skull.

Although it appears Synchron’s goal is to help those disabled, history tells us new technology is usually hijacked and used for nefarious means.

Another problem with brain-computer interfaces is the risk of being hacked.

Elon Musk, Bezos, and Gates have all invested heavily in AI technology.

Here are some of the companies making waves with BCI developments: via Mass Device

An Elon Musk venture, Neuralink is developing an implant placed in the brain through a robot-assisted procedure.

Musk has said in the past that the less invasive Link device (compared to other deep brain stimulation systems that are implanted around the chest area) is implanted through the skull. The entrepreneur claims it could be implanted in less than one hour in an outpatient setting and without the use of general anesthesia, with options for removal or upgrades down the line.

In a 2020 webcast, Musk described Link as a small device with a rechargeable battery meant to last a full day, with wires embedded in the cortical surface of the brain for continuously recording 1,024 channels of neural signals at once. It has a six-axis inertial measurement unit for tracking head movement, more sensors for measurables like temperature, and a Bluetooth antenna to connect with a smartphone app.

While Musk and company officials said they planned to file for FDA approval for human trials in 2020, it has yet to receive any such approval. Earlier this year, Neuralink and the University of California, Davis, were accused of “egregious violations of the Animal Welfare Act” by the Physicians Committee for Responsible Medicine (PCRM), citing documents obtained through a public records lawsuit. The allegations claimed that Neuralink caused extreme suffering in monkeys.

Multiple reports have claimed that Musk expressed frustration with the slow progress at Neuralink, but he has touted a “show and tell” that will demonstrate where the Link device is set for Oct. 31, 2022.

Anesthesia, with options for removal or upgrades down the line.

TRENDING: ONE MASSIVE BOT TRAP: Why Elon Musk’s Poll about ‘Stepping Down’ Is Not What It Seems

Officials at Synchron — developer of the catheter-delivered Stentrode brain-computer interface (BCI) implant — believe they’re the only BCI company tapping into blood vessels to capture signals from the brain.

Synchron’s rise to rival BCI developers reportedly caught the eye of Musk, who was said to have inquired to the company about a potential investment. No details were provided on whether or not the deal would involve a merger, acquisition, collaboration or any other type of coming together of the compa345anies.

While some companies have made recent waves with their BCI advancements, testing of Blackrock’s technology has been ongoing in human patients for nearly 20 years. The Utah Array implant has been used in patients since 2004 through research studies, with zero FDA-reported serious adverse events since then.

In 2021, Blackrock Neurotech received FDA breakthrough device designation for its MoveAgain BCI system for providing immobile patients with the ability to control a range of devices by only thinking. The company said at the time of receiving the breakthrough nod that MoveAgain BCI could offer improved mobility and independence that leads to returning to work, participating in leisure activities and communicating more effectively and quickly.

MoveAgain BCI includes an array implanted in the brain, which then decodes movement from neuronal activity. Signals are then transmitted wirelessly to an external device, like a cursor or wheelchair, providing people control of their external environment.

Blackrock and the University of Pittsburgh’s Rehab Neural Engineering Labs (Pitt RNEL) have collaborated on the first portable brain-computer interface (BCI) to allow patients to participate in research trials from home. A Blackrock representative said it’s the final step as the company prepares to launch its first commercial product early next year.

Should the device be made commercially available, it would mark the first time humans are connected to computers outside of academic research studies.

ClearPoint Neuro in July 2021 entered into an agreement with none other than Blackrock Neurotech to develop an automated surgical solution for implanting BCIs into patients with neurological disorders — including from paralysis, ALS, blindness and hearing loss.

Solana Beach, Calif.–based ClearPoint Neuro at the time that the partnership aims to leverage its platform and software with Blackrock Neurotech’s Utah Array to deliver a clinical solution for surgeons that is more streamlined and effective than other BCI implantation surgeries performed to date.
Earlier this year, ClearPoint announced a collaboration with Durham, North Carolina–based Higgs Boson Health to bring to market a patient-facing digital application based on the ManageMySurgery platform. The application will specialize in drug delivery to the brain and spine, as well as BCI technology.

BrainGate’s neurotechnology uses an array of micro-electrodes implanted in the brain to let humans operate external devices such as computers or robotic arms with just their thought. The investigational BrainGate system has allowed people with spinal cord injury, brainstem stroke, and ALS to control a computer cursor simply by thinking about the movement of their own paralyzed hand and arm.

The company has received FDA investigational device exemption for human trials with the brain-computer interface technology. In April 2021, BrainGate clinical trial participants with tetraplegia demonstrated the use of the intracortical wireless, high-bandwith BCI with an external wireless transmitter.
BrainGate said on its website that early clinical research demonstrated that the system had intuitive control over advanced prosthetic limbs. The company claimed the system provided people with paralysis with easy control over powerful assistive movement and communication devices.

Neurable began as a developer of virtual reality (VR) applications, including a mind-controlled VR game that it unveiled in 2017.

However, after raising a $6 million Series A funding round in 2019, the company aimed to move toward the development of an everyday BCI offering in the form of headphones for consumers, a Forbes report said.

“We want to be the company that makes neurotechnology easily accessible to everyone, everywhere,” the company’s website reads.

Neurable CEO Dr. Ramses Alcaide told Forbes that using VR demonstrated concepts and proved the early value of BCI technology, allowing the company to create the headphone form factor that it aims to bring to market. Through this, Neurable aims to make computer interfaces more intuitive and go beyond the potential limitations of keyboards, touch screens, and voice interfaces.