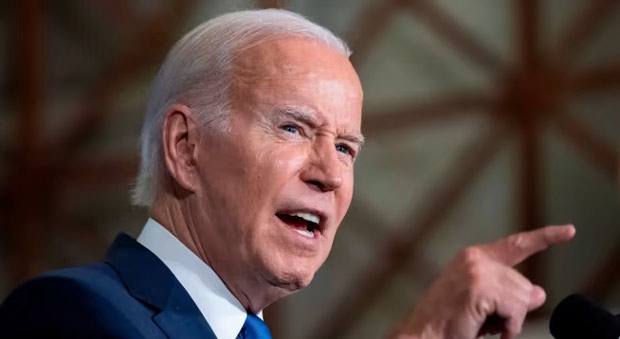 Joe Biden claimed former President Donald Trump referred to people like the man who attacked Paul Pelosi as “patriots” while addressing a crowd in California on Thursday.

Paul Pelosi, the husband of house speaker Nancy Pelosi, was attacked by Canadian illegal alien nudist activist – it was first reported they were both in their underwear. However, media outlets corrected this, saying the attacker was in shorts, and Pelosi was in a pajama shirt.

“And how can you call yourself a democracy when you have a group of 1,000 people who storm the United States Capitol, break the windows and doors down, two policemen die as a consequence of it [sic], break through the House and Senate doors and chambers, have people cowering on the floor, threatening to kill people?” Biden said.

“You saw what happened to Paul Pelosi, in an effort to get to Nancy. Well, guess what? What do they call these guys? What do Trump and all his Trumpies call them? He said they’re “patriots.” No! No! No! No! No! Not a joke! These are “patriots”! Biden added.

Despite Biden’s claims, there were no police officers killed in the Capitol riot, although one who was attacked later died of natural causes.

Additionally, there is no record of Trump calling Paul Pelosi’s assailant a “patriot.”

Biden also claimed that the Pelosi attacker was evoking the Capitol riot because he demanded “Where is Nancy?” just as some rioters had done.

Biden’s remarks come as he scrambles to help embattled Democrats with their get-out-the-vote effort as polls suggest a massive Republican surge.

Biden claimed during his address that his administration fixed the Department of Veterans Affairs. However, that was achieved by the Trump administration after years of scandals during the Obama-Biden administration.

Earlier ths week, Biden falsely claimed he met the ‘inventor’ of insulin despite the naturally occurring hormone being discovered in 1921, and the doctor dying a year before he was born.

The self-proclaimed gaffe machine was torched online for his claim about insulin, a signature achievement by Canadian doctors Frederick Banting and Charles Best, who successfully isolated the hormone in July 1921.