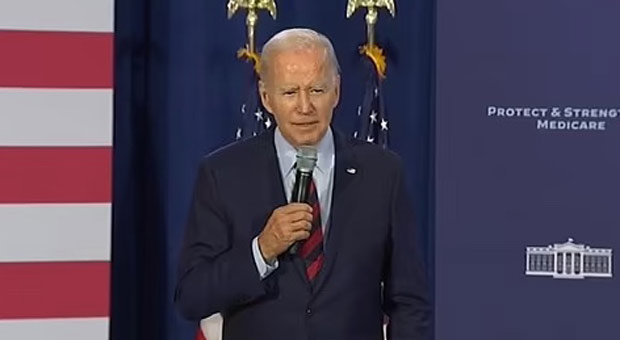 Joe Biden delivered another gaffe-filled speech in Florida on Tuesday, falsely claiming he met the ‘inventor’ of insulin despite the naturally occurring hormone being discovered in 1921, and the doctor dying a year before he was born.

The self-proclaimed gaffe machine was torched online for his claim about insulin, a signature achievement by Canadian doctors Frederick Banting and Charles Best, who successfully isolated the hormone in July 1921.

“Okay, you know how much it cost to make that insulin drug for diabetes?” Biden asked the crowd.

“It was invented by a man who did not patent it because he wanted it available for everyone.”

“And if you count packaging and everything, you can maybe get it up to $15,” he added.

RELATED: Trump Predicts Midterm Bloodbath: ‘With Your Vote, You Can Humiliate Joe Biden’

“Well, guess what? They’re not going to have to pay more than $35 a month. They’ll still make a significant profit instead of an average of $400 a month,” Biden said.

Banting died in 1941, a year before Biden was born.

Best died in 1978, five years after Biden was elected to the Senate, meaning the meeting was not entirely impossible, but not likely and definitely not confirmed.

Biden also confused Congresswoman Debbie Wasserman Schultz, who is hoping to get re-elected in Florida’s 23rd district in greater Miami as a Senator.

“I don’t have a greater friend in the United States Senate,” Biden said.

“And I didn’t have a greater friend as vice president, nor as president.”

Biden also repeated the false claim that his son Beau died in Iraq, even though it has been confirmed on multiple occasions that his son died of brain cancer at the Walter Reed National Military Medical Center in Bethesda, Maryland.

“Inflation is a worldwide problem right now because of a war in Iraq… excuse me, the war in Ukraine. I’m thinking about Iraq because that’s where my son died,” Biden falsely claimed.

He is a pathological liar – he just can’t help himself. If he was Pinochio – we would be able to walk across the Pacific ocean on his nose bridge.

It’s getting worse every day. This doddering old man is frightening in the position he is installed in. Those who did this should be held accountable !!

Those drugs they use to keep him upright have some amazing side effects!