Biden Spells Out ‘Dot’ in Website URL: Proof He Reads Any Words from Teleprompter 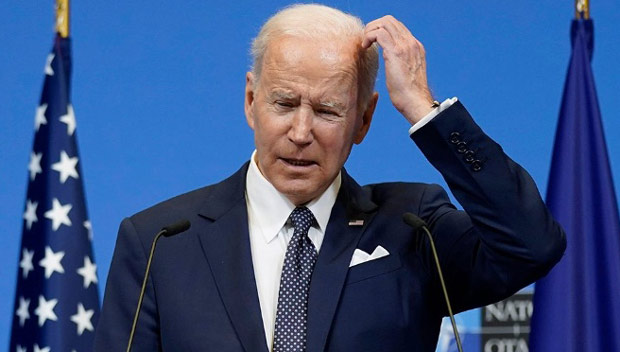 President Joe Biden faced backlash on Monday after attempting to share a website to stop fraud in his student debt handouts plan...with the help of his teleprompter.

The gaffe-machine in-chief announced the launch of an online application portal for those earning below $125,000 per year receive up to $10,000 in handouts.

But the president hit some road blocks when he tried spelled out the word “dot” while giving the URL of the FTC’s website.

“If you get any questionable calls, please tell us by going to report fraud…report fraud, D-O-T, F-T-C, dot gov,” Biden said for the website reportfraud.ftc.gov.

The gaffe didn’t go unnoticed by social media, who roasted him for reading out anything put on his teleprompter.

RELATED: Trump Predicts Midterm Bloodbath: ‘With Your Vote, You Can Humiliate Joe Biden’

“Biden is so gone that he will literally read ANY WORDS they put on the teleprompter in front of him. ‘reportfraud D-O-T F-T-C dot gov.'”

“Stand strong, Joe! You’re the only thing standing between us and Kamala,” YouTuber Todd Masson joked.

“Can’t make this up. They put the word ‘dot’ in the teleprompter and he literally got so confused he spelt it out instead of just saying ‘dot,'” RNC Research rapid response director Tommy Pigott wrote.

But many media outlets were also forced to acknowledge flaws and the enormous impact on inflation.

The National embarrassment that just keeps on embarrassing America.

Didn’t Obummer do the same thing?

Of course there will be fraud, it is a standard among Democrats. Any giveaway proposed, supported or approved by the Dems has built in fraud so their friends can get OUR money. Lawyers, special interest groups, just plain fraudsters take advantage of any such program. The latest scheme involves Camp Lejeune “survivors”. On the surface it sounds good. I just wonder who it is really intended to help (lawyers?)