Trump Predicts Midterm Bloodbath: ‘With Your Vote, You Can Humiliate Joe Biden’ 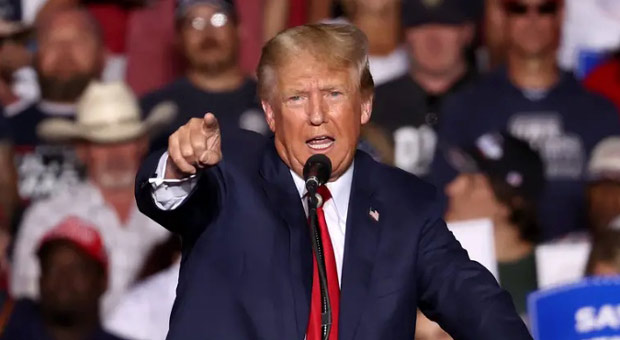 On Saturday, Trump addressed a massive crowd in Minden, Nevada, where he predicted the corrupt Democrat machine would take an enormous hit this November.

“This election is your chance to send a strong message to all of the arrogant… leftwing radicals who want to dictate what you can say, what you can think, and how you should live your life. I don’t think so,” he said during the Save America rally:

“With your vote, you can humiliate Joe Biden,” Trump said.

“Although, he’s pretty much been humiliated already. And the corrupt Democrat machine and you can declare that America will always remain a free, and maybe we can say free and fair, country,” Trump added.

“You can take the five worst presidents in American history put them together and they would not have done the damage Joe Biden has done to our nation in less than two short years. Look at what is happening to our country,” he continued.

Trump also played a hilarious compilation video of Biden’s gaffes during the rally.

Just 39 percent of registered voters approve of Biden as the midterm elections approach, according to a Civiqs poll released in September.

“Joe Biden’s approval rating has remained below 40 percent since last September after the deadly Afghan withdrawal,” the outlet said.