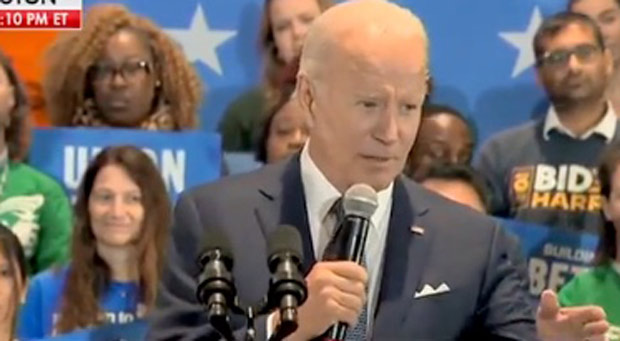 President Joe Biden made some creepy remarks to a woman in the crowd at a Democratic National Committee speech with a teachers union on Friday.

After the audience laughed, Biden said, “This woman helped me get a lot done.”

Later in the remarks, Biden said:

“I mean this from the bottom of my heart. Those of you who know me, no one ever doubts I mean what I say, the problem is I sometimes say all that I mean.”

RELATED: Joe Biden Has Spent Almost Half of His Presidency on Vacation: Report

It was the beginning of the speech in Washington D.C., where he attacked MAGA Republicans and called GOP leader Kevin McCarthy’s “Commitment to America” policy plan “thin.”

Biden also promised to veto a Republican abortion ban and said the midterms are a choice between “hope, unity, optimism’ and ‘division, fear, darkness.”

The president also promised to veto a Republican abortion ban if it arrived at his desk and said the midterms are a choice between ‘hope, unity, optimism’ and ‘division, fear, darkness.”

Biden then continued his attacks on the use of assault weapons.