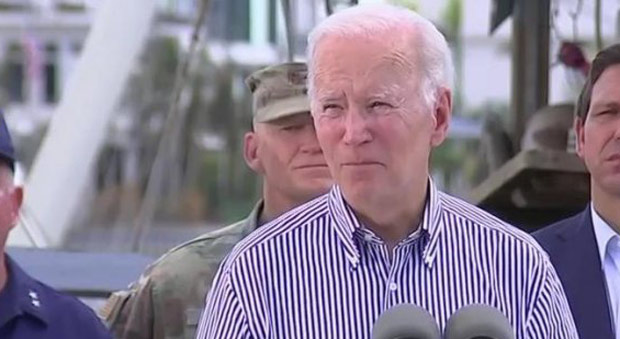 President Joe Biden insulted Floridians who lost their homes in hurricane Ian by comparing the disaster to a small kitchen fire in his house.

“I know from experience, how much — how much anxiety and fear and concern [unintelligible] the people,” Biden said.

“We didn’t lose our whole home, but lightning struck and we lost an awful lot of it about 15 years ago,” Biden added.

However, Biden’s claims are greatly exaggerated because, according to an Associated Press report, it was “a small fire that was contained to the kitchen.”

So Biden compared thousands of people losing their entire homes to his small house fire contained in his kitchen.

This isn’t the first time Biden exaggerated his kitchen fire.

According to a report from the New York Post last year, Biden also claimed his small kitchen fire in his Delaware home “once burned down with the first lady inside.”

Biden’s remarks are reminiscent of his inappropriate efforts to empathize with Gold Star families by invoking his late son Beau, who died of brain cancer.

Biden brought up his late son last year while visiting with the family members of U.S. servicemembers who lost their lives during his botched withdrawal from Afghanistan.

“When he just kept talking about his son so much it was just — my interest was lost in that,” said Mark Schmitz, whose 20-year-old son Jared died in Kabul.

“I was more focused on my own son than what happened with him and his son. I’m not trying to insult the president, but it just didn’t seem that appropriate to spend that much time on his own son.”

Biden’s embarrassing gaffes encapsulate the massive disconnect between the Washington establishment and average Americans, but at the same time, it serves to wake people up.