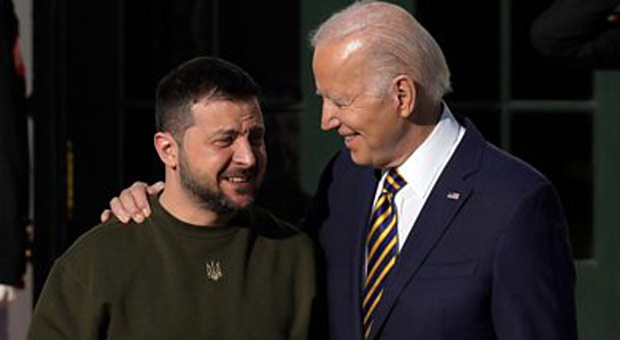 Blinken said the United States “will stand united with Ukraine for as long as it takes” following the announcement of the funds.

Besides the $2.5 billion for Ukraine, congress already awarded $45 billion to the country in the $1.7 trillion omnibus spending bill, which was signed into law in December 2022.

This brings the total amount of aid sent to Ukraine to over $110 billion.

“Pursuant to a delegation of authority from the President, I am authorizing our 30th drawdown of U.S. arms and equipment for Ukraine since August 2021,” Blinken said in a press release.

“The package also includes critical additional air defense support for Ukraine, including more Avenger air defense systems and surface-to-air missiles, as well as additional munitions for NASAMS that the United States has previously provided,” he added.

“The package also contains night vision devices, small arms ammunition, and other items to support Ukraine as it bravely defends its people, its sovereignty, and its territorial integrity.”

Blinken said the U.S. “continues to rally the world to support Ukraine,” applauding the “incredible solidarity from our allies and partners” in aiding Ukraine.

He also confirmed the Biden administration plans to “stand United” with Ukraine “for as long as it takes.”

Blinken also mentioned that the Biden administration plans to “stand United” with Ukraine “for as long as it takes.”

“Until it does so, we will stand United with Ukraine for as long as it takes.”

Republican lawmakers Sen. J.D. Vance (R-OH) and Rep. Dan Bishop (R-NC) penned a letter to the Biden administration demanding a “full crosscutting report” of all the “U.S. government-wide expenditures for Ukraine and ‘countries impacted by the situation in Ukraine’ since February 24, 2022.”

“Taken together, the four Ukraine supplemental spending bills passed since the escalation of the Ukraine/Russia conflict in February of 2022 amount to arguably the fourth-largest discretionary appropriations bill,” the lawmakers wrote.