Zelensky Predicts ‘There Would Be No War’ If Putin Suddenly Dies 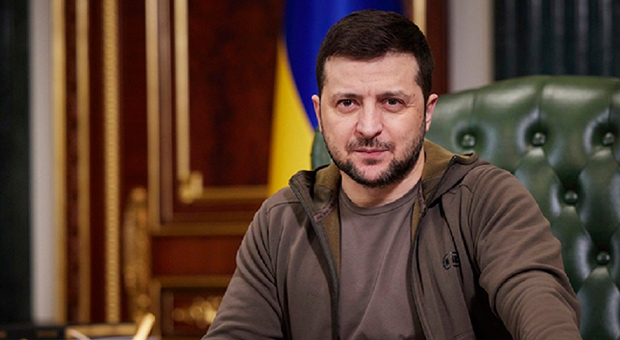 Zelensky’s prediction came during an interview with David Letterman, who traveled to Kyiv to interview the Ukrainian leader for his Netflix series My Next Guest Needs No Introduction.

Letterman asked Zelensky how the war would continue without Putin.

Letterman also interviewed Zelensky for his Netflix program in October, the same time the leader issued a presidential decree branding any talks with Putin himself “impossible.”

Zelensky was asked if he thought Putin was supported by his people.

“Unfortunately, we have to state that quite a large percentage of people believe him [Putin],” the Ukrainian president said.

“They are aware of the reality, but they are just afraid,” he lamented.

Letterman then asked about Putin’s influence as a solitary figure has on the war.

“Let’s just say that Putin got a really bad cold and died,” Letterman suggested, “or accidentally fell out a window and died, would this [the invasion] continue?”

The specific reference to windows appeared to give the nod to suspicious political deaths by “falling” out of windows that have occurred in Russia in the past five years.

“No. There would be no war,” Zelensky responded. “There wouldn’t be. The authoritarian regime is dangerous as it poses great risks. Because you can’t allow just one person to have total control over everything.”

“That’s why when such a person is gone, institutions come to a halt,” he continued. “That’s what happened back in the Soviet Union. Everything collapsed. And that’s why I think if he’s gone, it will be hard for them. They will have to deal with their internal policy rather than foreign issues.”

“Look, it’s very difficult to negotiate [with Putin], but today there were moments when we agreed on something, on certain things,” Zelensky said after the meeting. “That’s because he dissects every question into details … and then we begin to even consider every word. So yes, this is difficult.”

“Many questions were tackled, and my counterparts have said it is a very good result for a first meeting. But I will be honest — it is very little, I wanted to resolve a larger number of problems,” he admitted.

“They tell you that we’re Nazis. But how can a people that lost eight million lives to defeat the Nazis support Nazism? How can I be a Nazi?” Zelensky said at the time. “Say it to my grandfather, who fought in World War II as a Soviet infantryman and died a colonel in an independent Ukraine.”

“If Russia’s leadership does not want to meet us across the table for the sake of peace, perhaps it will sit at that table with you,” he concluded.

Isn’t this a “No Duh” headline?