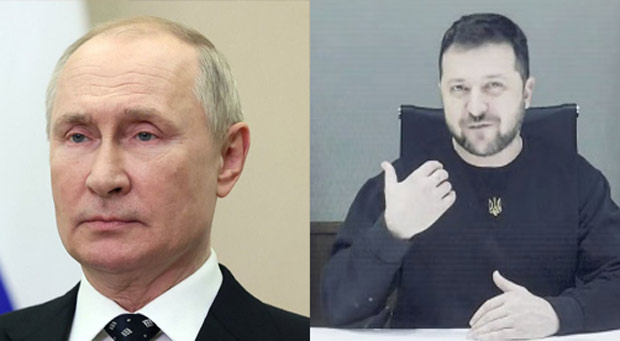 Ukrainian President Volodymyr Zelensky told global elites at the World Economic Forum’s annual meeting in Davos that he can’t negotiate with Vladimir Putin because he’s not “entirely sure” he is still alive.

“I don’t quite understand who to talk to and about what,” Zelensky began.

“I’m not sure that Russia’s president, who sometimes appears against the chroma key is really him,” Zelensky responded when asked about the possibility of peace talks,” he added.

The chroma key is a visual effects technique used to alter the background of a video.

Zelensky used this uncertainty as the reason he can’t negotiate with Putin.

He also said the crash near a nursery was “not an accident, describing it” a consequence of Putin’s invasion of his country.

Zelensky said the tragedy was a consequence of the war, and indirectly blaming Putin for the deadly helicopter crash.

“There are no accidents at war. These are all war results,” Zelensky said.

The Ukrainian leader also vowed to reclaim Crimea calling the peninsular annexed by Russia in 2014 “our land.”

Ukraine’s wartime leader criticized Germany’s hesitation about supplying its modern Leopard tanks amid reports that Berlin will only provide them if the U.S. offers its Abrams tanks as well.

“There are times where we shouldn’t hesitate or shouldn’t compare. When someone says, “I will give tanks if someone else will also share tanks,”‘ Zelensky told an audience, adding, “I don’t think this is the right strategy to go with.”

The U.S. and other Western nations have pledged billions for Ukraine, as allies and arms suppliers are set to meet on Friday at the US-run Ramstein base in Germany.

‘We need all the strength there is out there because we are fighting against all of this tyranny,’ he said, ‘We can not just do it (the fight) with motivation and morale,” Zelensky said.

He described weapons as a “vaccine against Russian tyranny.”

Zelensky went on to say there was ‘no stagnation’ fighting on the frontlines but added there was a slowdown” during the winter.

He then reiterated that Ukraine aimed to reclaim Crimea amid reports the U.S. will assist in the objective.

“Our objective is to liberate all of our territories,” he said.

“Crimea is our land, our territory, our sea, and our mountains. Give us your weapons and we will bring our land back.”