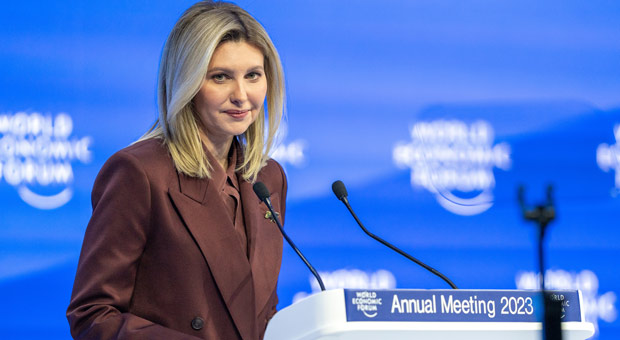 Ukraine’s first lady, Olena Zelenska, flew into the World Economic Forum (WEF) annual meeting in Davos on Tuesday to push for more funds for weaponry in their war with Russia.

Zelenska warned the globalists Davos that Kyiv and its forces are all that stands between Russian aggression and a new nuclear disaster, pushing for foreign government representatives to throw more money at the country.

“You are all united by the fact that you are really very influential,” Zelenska said.

“But there is also something that separates you – and that is that not all of you are using this influence or sometimes you use it in a way that divides even more.”

Zelenska added that global cooperation is needed amid Russia’s aggression in Europe, creating a massive crisis and the world facing collapse.

Ukraine’s first lady then questioned what world we have when state borders collapse.

“We are facing a threat of the collapse of the world as we know it, the way that we are accustomed to it or to what we aspire,” she said.

‘” What can be life in a world where tanks are allowed to strike at nuclear power stations?” she asked.

“What will happen to inflation when state borders start to collapse and the integrity of countries will be trampled on by those who want it?”

“What will happen to the cost of living when millions – not millions but tens of millions – of people will be forced to flee mass starvation and will become refugees.”

On Sunday, Zelenska told CNN that despite Russia’s missile strikes on their country, “we understand that upon carrying on for a year, we are capable of persevering for even longer.”

Countries like the U.K., the U.S., and Frances have all vowed to send weapons to Ukraine, such as tanks and armored combat vehicles.