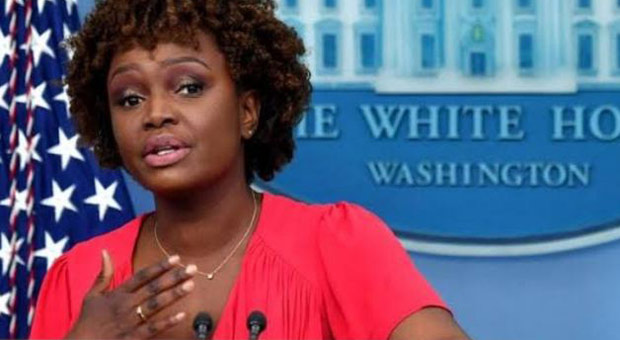 Biden said, “The MAGA Republicans don’t just threaten our personal rights and economic security,” before declaring “MAGA Republicans” are “a threat to our very democracy. They refuse to accept the will of the people. They embrace — embrace — political violence. They don’t believe in democracy.”

“It’s not hyperbole,” he continued, adding, “America is at a genuine inflection point.”

“It occurs every six or seven generations in world history,” further proclaiming, “What we’re seeing now is either the beginning or the death knell of an extreme MAGA philosophy… It’s not just Trump, it’s the entire philosophy that underpins the — I’m going to say something — it’s like semi-fascism.”

As usual, Jean-Pierre attempted to squirm her way out of explaining what “semi-fascism” is.

During a CNN interview, host Don Lemon said, “the President likened what he called extreme MAGA philosophy to semi-fascism. What exactly is semi-fascism, Karine?”

But when the Press Secretary veered off the subject, Lemon interjected and stated, “with all due respect. We have a short amount of time. I want to get to all those things, But if you answer my question, we can get to those things.”

He again asked, “what exactly is semi-fascism?”

Again, Jean-Pierre refused to answer before snapping, “by having this back and forth, we are actually taking away from the time.”

Jean-Pierre repeated the claim that “this MAGA element of the Republican Party” is “attacking our democracy, they are taking away our freedom.”

Lemon thanked her for answering the question, even though she didn’t answer the question.

If you actually pay attention the current facists are the democrat party, look up the definition and it spells it all out. (violent suppression of the opposition) and anytime it happens the democrats turn there head like nothing to see here.

The definition of Fascism is national socialism. Under Fascism, the state uses laws and regulations to ‘own’ private property, (means of production). The tyranny follows.
The USA has been a Fascist state for decades since the creation of the FDA and subsequent regulatory agencies that control private property.

She is definitely in over her first black racist lesbian head.

I’ve got a pet rock that’s smarter than the current Press Sec.

Rules for radicals, it is the left’s playbook.

Is there something as a semi a** hole?

She is one of the dimmest Biden people. I turn tv off whenever she comes on. She is not capable of answering questions.

I will accept the will of the people. Prove to me the election was not rigged. I say it was. Prove me wrong?

Karine Jean-Pierre has to be one of the stupidest little twits on the planet.

Left-Leaning 'The Breakfast Club' Hosts Stunned as Callers Say "I'd Rather Have Trump" than Biden
Hosts of Charlamagne tha God’s left-leaning ‘The Breakfast Club’ were left stunned...
No posts found
wpDiscuz
11
0
What are your thoughts? Click to commentx
()
x
| Reply