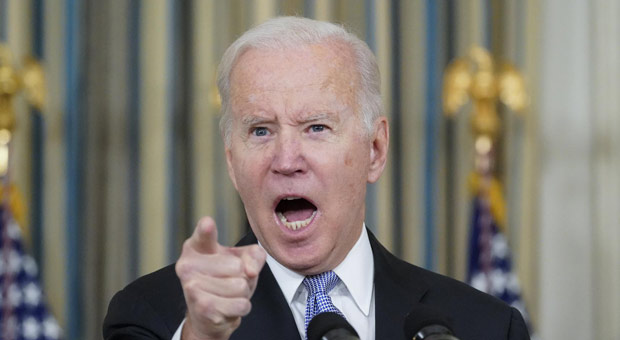 The president also described the MAGA movement as “semi-fascist” at a fundraiser.

Biden also spoke about his years of service in the Senate, working with mainstream Republicans.

“There are not many real Republicans anymore,” he lamented.

He also rallied with supporters at a Democrat National Committee event in Maryland, warning of MAGA Republicans running for office in the midterm elections.

Biden also praised Republican Governor of Maryland, Larry Hogan, as “a Republican you can deal with.”

The president smeared his opponents as dangerous for the United States of America, a far cry from his calls for unity during his presidential election campaign.

“They are a threat to our very democracy,” he said, accusing them of “destroying America” with “burn it all down politics.”

Biden said MAGA Republicans only sought to move the country back and spread “anger, violence, hate, and division.”

He condemned MAGA Republicans as “climate deniers” by blocking his green energy agenda.

“It’s not hyperbole, the very survival of our planet is on the ballot,” he said.

His remarks come weeks after come just weeks after Liz Cheney, who suffered a blistering defeat to challenger Harriet Hageman, vowed to ‘unite’ Americans across party lines to prevent Donald Trump from regaining the White House.

Biden boasted he received more than 81 million votes, but when a protester challenged him about the number, he replied, “Folks, ignorance knows no boundaries.”

He warned Democrats that more needed to be done to stop the politics of Trump’s effort to Make America Great Again.

“It’s not hyperbole, now you need to vote to literally save Democracy again,” he said.

you Mr Biteme are the recipient of a stolen election. And you just dissed at least 75 million voting Americans showing us what a loser you really are.