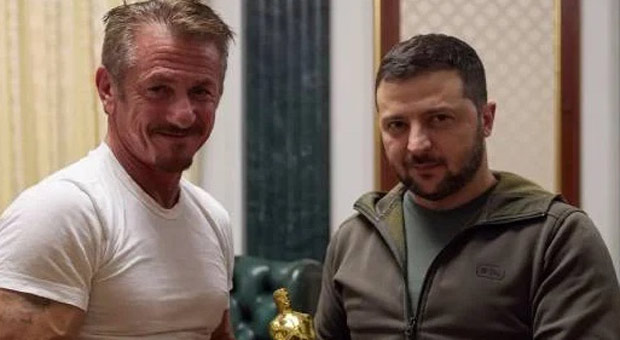 Ukrainian President Volodymyr Zelensky accepted an oscar from Sean Penn as a “symbolic” gesture” amid the ongoing war with Russia.

The Hollywood star was seen giving one of his Oscar awards to Zelensky.

Penn has cozied up to many questionable leaders in the past, including Fidel Castro and Hugo Chavez.

“This is for you,” Penn said as he handed over his Oscar to Zelensky.

“I feel terrible. It’s just a symbolic, silly thing, but if I know this is here with you, then I’ll feel better and stronger for the fight,” Penn added.

The Milk actor continued, “When you win, bring it back to Malibu. I’ll feel much better knowing a piece of me is here.”

Zelensky responded, “We have to win.”

Sharing a clip, the Ukrainian president wrote in a caption, “Sean brought his Oscar statuette as a symbol of faith in the victory of our country. It will be in Ukraine until the end of the war.”

At the same meeting, the Ukrainian leader also presented Sean Penn with a Order of Merit of the III degree award for his “significant contribution to the popularisation of Ukraine in the world.”

Meanwhile, Zelensky mentioned that Penn’s name was also added to “Walk of the Brave” in Kyiv.

He has reportedly previously said he had considered fighting for Ukraine during the conflict.

Penn was also in Ukraine on February 24, after the Russia-Ukraine crisis began.

At the time, Penn met with Zelensky’s adviser Alexander Rodnyansky in Kyiv, according to photos posted to official social media accounts.

Ah, well then. The war really is just show business then, and Zelensky still just a bad actor.