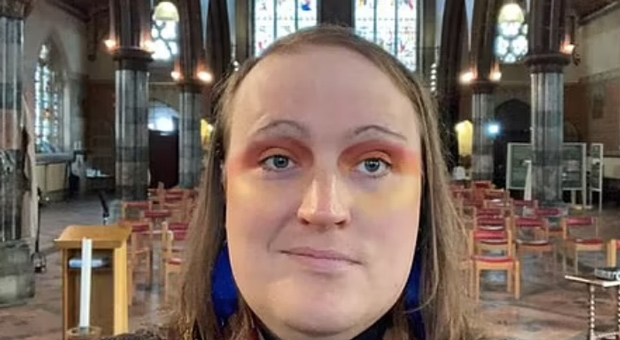 The Church of England’s ‘first’ non-binary vicar, 36, believes God directed their children to discover the ‘truth’ about their gender identity.

Bingo Allison, who uses ‘they/them’ pronouns and defines as gender-queer, experienced an epiphany while reading a passage from the Old Testament.

Allison said they previously had a “very conservative and traditional” upbringing after believing that being gay was ‘sinful.’

But the non-binary priest is now outspoken about gender issues and uses social media to spread their message, even claiming Jesus “loves sparkly eyebrows.”

In an interview with the Liverpool Echo, Allison spoke about their 15-year gender-embracing journey.

“My views used to be very traditional and very conservative certainly. Some might call them bigoted, and there was a lot of ignorance and a lot of “othering,” they said.

“I didn’t take the time to learn from other people’s experiences. I was definitely in a lot of denial and some of that denial came out in denial of other people’s identities.”

Allison explained how the language which the bible originally used in Genesis 1:27 spoke about “from maleness to femaleness” as opposed to men and women.

“I was sitting there in the middle of the night when I realized I might need to run my life upside down – it was a deepening spiritual experience,” Allison said.

“I am passionate about fully including neurodivergent people in the life and faith of the Church, particularly in our telling and retelling of stories from the Bible,” Allison wrote.

“The history of biblical interpretation is littered with the opinions of rich, white, straight, cisgender, able-bodied, neurotypical men assuming that everyone in the passages that they read thought like them and perceived the world like them.”

“The biases that this creates exclude anyone who doesn’t fit from fully engaging with the Bible, and often lead the church to miss out on vital perspective on all sorts of biblical narratives.”

“So if Biblical scholars tended to be neurotypical and tended to assume that everyone they read about in the Bible was like them unless specifically informed otherwise, what would happen if I assumed the opposite?”

“What if a neurodivergent hermeneutic started with the assumption that, unless specifically informed otherwise, certain characters were neurodivergent?”

The world is an increasingly sick place.

The insane walk among us.

This is not going to help bring back lapsed Anglican believers to the Church…….

He needs to stick his head in the Thames three times and pull it out twice.