Ukraine Erases Russian Past by pulling Down Statues, Renaming Hundreds of Streets 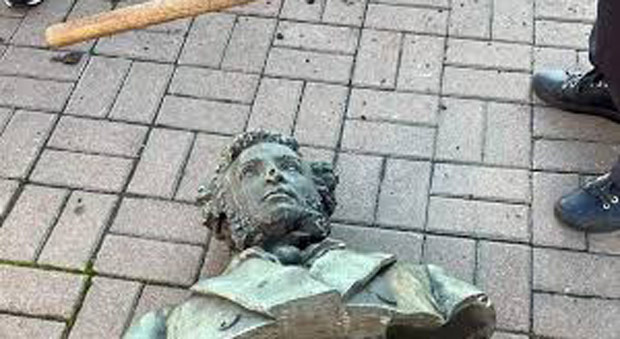 Ukraine is erasing the vestiges of Soviet and Russian influence from its public spaces by dismantling monuments and renaming hundreds of streets.

The country is instead honoring its own artists, poets, soldiers, and independence leaders as a move to wipe out any Russian imprint on the country.

Following the Russian invasion earlier this year, leaving hundreds dead and infrastructure destroyed, Ukraine is now removing its communist past into one of “de-Russification.”

Russia, through the Soviet Union, is seen by many in Ukraine as having stamped its domination of its smaller southwestern neighbor for generations, consigning its artists, poets and military heroes to relative obscurity compared with more famous Russians.

If victors write history, as some say, Ukrainians are doing some rewriting of their own – even as their fate hangs in the balance. Their national identity is having what may be an unprecedented surge, in ways large and small.

As the Associated Press reported:

In its program, Kyiv conducted an online survey and received 280,000 suggestions in a single day, Prokopiv said. Then, an expert group sifted through the responses, and municipal officials and street residents give a final stamp of approval.

Under the “de-Communization” program, about 200 streets were renamed in Kyiv before this year. In 2022 alone, that same number of streets have been renamed and another 100 are scheduled to get renamed soon, Prokopiv said.

A street named for philosopher Friedrich Engels will honor Ukrainian avant-garde poet Bohdan-Ihor Antonych. A boulevard whose name translates as “Friendship of Peoples” — an allusion to the diverse ethnicities under the USSR – will honor Mykola Mikhnovsky, an early proponent of Ukrainian independence.

Another street recognizes the “Heroes of Mariupol” — fighters who held out for months against a devastating Russian campaign in that Sea of Azov port city that eventually fell. A street named for the Russian city of Volgograd is now called Roman Ratushnyi Street in honor of a 24-year-old civic and environmental activist who was killed in the war.

A small street in northern Kyiv still bears Dostoevsky’s name but soon will be named for Warhol, the late Pop Art visionary from the United States whose parents had family roots in Slovakia, across Ukraine’s western border.

Valeriy Sholomitsky, who has lived on Dostoevsky Street for nearly 40 years, said he could go either way.

“We have under 20 houses here. That’s very few,” Sholomitsky said as he shoveled snow off the street in front of a fading address sign bearing the name of the Russian writer. He said Warhol was “our artist” — with heritage in eastern Europe:

“Maybe it is right that we are changing many streets now, because we used to name them incorrectly,” he added.