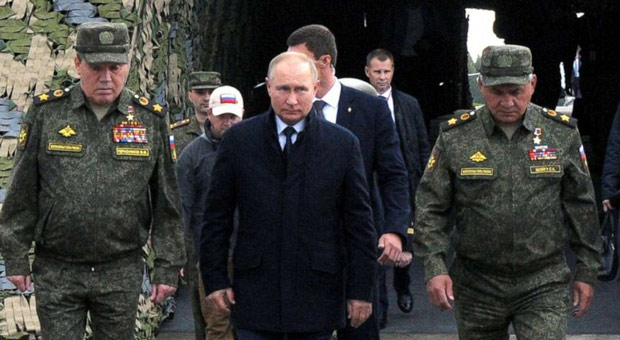 Venediktov said that should Ukraine be accepted into the Western alliance, “Kiev is well aware that such a step would mean a guaranteed escalation to World War Three.”

“Apparently, that’s what they are counting on – to create informational noise and draw attention to themselves once again,” the Russian security tsar said.

“But given that many members of the Kiev regime are out of touch with reality, I wouldn’t be surprised if some people out there really expect their country to be admitted to NATO.”

Venediktov NATO understands the “suicidal nature” of allowing Ukraine into the alliance, adding that he did not expect “serious” powers to allow such a move to occur, which would lead to a potential triggering of Article Five of the treaty.

“We are also aware that, despite statements about not being involved in the events in Ukraine, the real actions taken by Westerners show that they are a direct party to the conflict,” the official said.

“In any case, Russia’s position remains unchanged: Ukraine’s accession to NATO or some other alliances formed under the auspices of the United States is unacceptable for us,” the Deputy Secretary of the Russian Security Council concluded.

But NATO membership from Ukraine is not likely given the requirement for all 30 members to give their consent to the accession, including countries like Hungary, which would more than likely oppose the move.

However, the looming threat of World War III is still present amid rhetoric from Russia and the West.

“We have not faced the prospect of Armageddon since [President] Kennedy and the [1962] Cuban missile crisis. I don’t think there’s any such thing as the ability to easily use a tactical nuclear weapon and not end up with Armageddon.”

Meanwhile, Putin hinted he would be prepared to use tactical nuclear strikes, saying he would use “all the means at our disposal” to defend Russia.

President Zelensky also called on NATO to launch nuclear “preemptive strikes” on the Russian mainland in order to “make it impossible for Russia to use nuclear weapons.”

Russia is having enough trouble fighting just Ukraine. Do they realy want to fight all