U.N. Chief Tells Elites at Davos He ‘Feels the Pain’ of Those Suffering from ‘Cost of Living’ 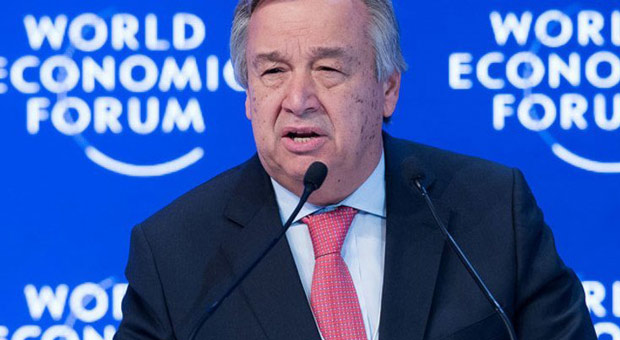 U.N. chief Antonio Guterres flew to the luxury ski resort of Davos to join global elites at the World Economic Forum (WEF) annual meeting “he feels the pain” of those suffering from inequality, food shortages, and the cost of living.

Guterres told WEF attendees he has an “understanding” of life inside the storm of troubles, a world away from the luxury confines of Davos’s unelected and unrepresentative elites.

Earlier this week, Guterres spoke after the official opening, which saw delegates welcomed with fine wine and champagne, canapes, and private dining.

It sounds like the U.N. Chief really “feels the pain.”

Meanwhile, British actor Idris Elba also decried global food poverty and “the unjustness of half the world eating and half the world not eating” to a backdrop of champagne and canapes in luxurious surroundings.

The Luther star, a goodwill ambassador for the U.N.’s International Fund for Agricultural Development (IFAD), urged the world’s corporate and political elite to do more to help small farmers in Africa.

However, the decadence at Davos doesn’t stop there, with reports of a surge in high-class escorts as the demand for sexual services soars in the resort.

As The Daily Fetched reported on Tuesday, high-class escorts are booked into the same hotels as high-powered bosses and their employees.

One sex worker, named Liana, said she dresses in business attire to blend in among executives.

An investigation by The Times in 2020 found at least 100 prostitutes travel to Davos every year for the event, according to a Swiss police officer.