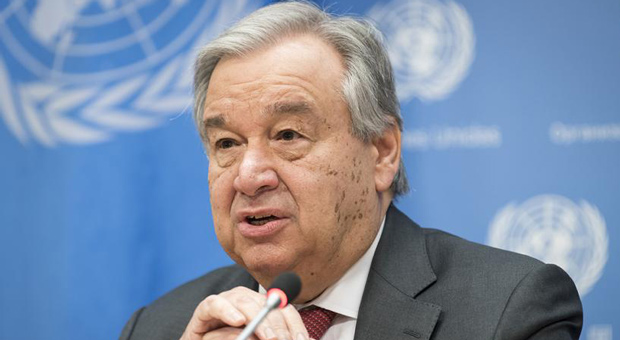 United Nations chief Antonio Guterres said that a Russian nuclear strike in Ukraine would lead to a global conflagration.

“I believe that if nuclear weapons will be used, there is probably no U.N. able to respond anymore,” U.N. Secretary-General Antonio Guterres said.

Guterres’s remarks came while traveling in Japan to observe the anniversary of the United States’ use of an atomic bomb to destroy Hiroshima during the Second World War.

International anxiety about the Kremlin’s potential to use weapons of mass destruction has festered for months as the U.S. and European states have equipped Ukrainian forces to thwart the main objectives of the invading Russian forces while tempering the weapons transfers in a bid to avoid Russian retaliation.

“I hope these asks will be taken seriously because we are witnessing a radicalization in the geopolitical situation that makes the risk of a nuclear war again something we cannot completely forget.”

The value of “no-first-use” policies is a subject of debate among American policymakers, as the formal pledge not to be the first country to use a nuclear weapon in a conflict could lead other countries to believe they can win a war if the U.S. doesn’t have a strong enough conventional military presence in a given conflict zone.

READ MORE:  IEA Chief: 'The World Is in Middle of the First Truly Global Energy Crisis'

As the outlet noted:

Scenarios involving a Russian nuclear strike have derived plausibility from Russian President Vladimir Putin’s intermittent references to Moscow’s nuclear arsenal, as well as the NATO member-state assessments that the Kremlin has embraced a theory that so-called tactical nuclear weapons could be used in Europe without provoking a nuclear retaliation from the U.S. And as the war has unfolded, Ukraine’s battlefield successes have raised the possibility that Kyiv can launch counterattacks to reclaim territory lost in the first weeks of the war.

“The Ukrainians are starting to put some pressure down south, and the Russians have been forced to redeploy their forces down there,” Undersecretary of Defense for Policy Colin Kahl told reporters at the Pentagon.

“So yes, both sides are taking casualties, the war is the most intense conventional conflict in Europe since the Second World War, but the Ukrainians have a lot of advantages, not the least of which their will to fight.”

Guterres cast doubt on the idea that this limited agreement might lead to an end of the fighting.

“The difficult thing in relation to a ceasefire comes from a simple fact: Ukraine cannot accept a situation in which its territory is taken by another country, and the Russian Federation doesn’t seem ready to accept that the areas that Russian forces have taken will not be annexed by Russian Federation or give way to new independent states,” Guterres said.

“So these two positions, at the present moment, are not possible to conciliate.”

As The DailyFetched reported last week:

Guterres said the “nuclear danger” has not been seen “since the height of the Cold War,” adding the world is “one miscalculation away from nuclear annihilation.”

The U.N. chief issued the warning at the Tenth Review Conference for countries signed up to the nuclear Non-Proliferation Treaty (NPT).

Putin is not stupid, nor is he desperate. It would take a stupid and desperate leader to start a nuclear exchange. Do we know any leaders who currently fit that bill?…I know one.