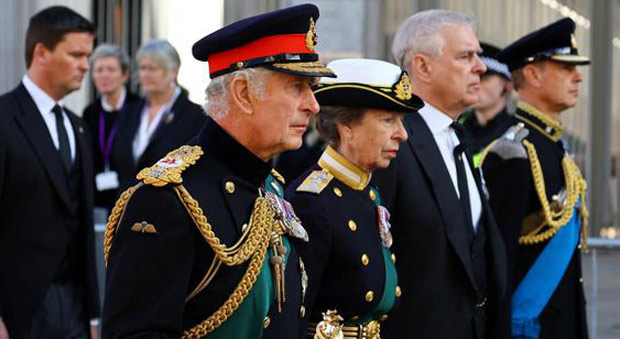 As vast amounts of the U.K. came together to mourn the death of Queen Elizabeth II this week, many anti-Monarchy activists were arrested in an apparent crack down on protests leading up to the funeral.

As Her Majesty’s lies in state at Westminster Hall, thousands of people have traveled not just all over the U.K. but from around the world to catch a glimpse of the coffin.

But the highly organized processions and royal protocols have not been without incident.

A recent spate of arrests by police sparked debate about British citizens’ right to free speech in the country.

As The Daily Fetched reported earlier this week, a 22-year-old anti-monarchy protester was arrested after calling Prince Andrew a “sick, old man” as the royal procession moved along Edinburgh’s Royal Mile.

Authorities stepped in and removed the protester from the crowd, who was later arrested despite maintaining he had “done nothing wrong.”

In another incident, a 45-year-old man was arrested after shouting, “Who elected him?” about King Charles III’s automatic accession to the throne.

The man was later released without charge.

Another protester who held a sign reading “Not my King” outside the Houses of Parliament in London was moved on by police ahead of the King’s arrival.

Meanwhile, a barrister holding a blank sign was warned he would be arrested under public order legislation if he wrote: “Not my King” on it.

The police response toward anti-monarchy activists has sparked criticism from speech campaigners who argue the right to protest is a fundamental cornerstone of democracy.

According to The Free Speech Union, arresting activists for legitimate protest is “wrong:”

“Republicans have the right to peacefully dissent. The police are under pressure, but they need to strike the right balance and ensure freedom of expression is upheld,” the group said.

The union urged protesters arrested and charged to contact a member of its case team:

“The right to protest is a fundamental human right, and the police and courts ignore it at their peril,” they added.

“As millions come together to respect Britain’s traditions and national identity, it is important to remember that the right to freedom of speech is the foundation of British democracy and to disrespect it at this moment, when our country is under an international lens, would be to flagrantly disrespect the values that define our country.”

“A monarchy which can’t survive some booing and a few pieces of cardboard is pretty flimsy, isn’t it? This kind of idiotic heavy-handed policing is actually, longer-term, dangerous for the monarchy,” he added.

The Metropolitan Police has reiterated that legitimate protest is still valid.

Deputy Assistant Commissioner Stuart Cundy said that the police maintain “the public absolutely have a right to protest, and we have been making this clear to all officers involved in the extraordinary policing operation currently in place.”

d***h TO ALL EURO ROYAL PEDOPHILE HOUSES , THEY , ALONG WITH THE JEW CENTRAL BANKING FAMILIES , LED BY “LORD” ROTHSCHILD , ARE THE GLOBALISTS .