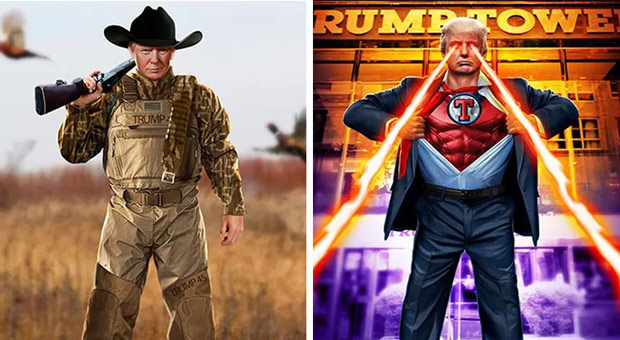 Former President Donald Trump has potentially raised $4.45 million from his Digital Trading Cards collection, which was only announced Thursday.

Forty-five thousand nonfungible tokens, or NFTs, sold out half a day after launch, OpenSea data reported.

The Trump digital trading cards likely amassed about $4.45 million, each selling $99 a piece.

Their makers are set to make additional money from the 10% creator fee.

“Hello, everyone. This is Donald Trump, hopefully your favorite president of all time, better than Lincoln, better than Washington, with an important announcement to make. I’m doing my first official Donald Trump NFT collection,” Trump said in a promo video for the NFTs.

NFT INT, which orchestrated the digital cards, claims the money will not be used to back Trump’s 2024 campaign.

“These Digital Trading Cards are not political and have nothing to do with any political campaign. NFT INT LLC is not owned, managed, or controlled by Donald J. Trump, The Trump Organization, CIC Digital LLC or any of their respective principals or affiliates. NFT INT LLC uses Donald J. Trump’s name, likeness and image under paid license from CIC Digital LLC, which license may be terminated,” the company said on a website for the cards.

RELATED: John Bolton Says He Will Run for President in 2024 to “Stop Trump”

Trump touted the NFTs as “incredible artwork pertaining to my life and my career.”

Some Trump card images depicted him as a superhero and a cowboy.

Hours after the announcement, Trump laid out a litany of policy proposals to safeguard free speech in the United States.

As The Washington Examiner noted:

Some of his most stalwart supporters, such as Steve Bannon and Michael Flynn, voiced unease about Trump’s NFT release and noted that they would fire whoever advised him to sell them.

The move comes amid a downturn in the crypto markets, which uses similar blockchain technology to NFTs, and as polling has shown Florida Gov. Ron DeSantis performing strongly in a hypothetical GOP primary matchup against Trump.

DeSantis has not yet declared for 2024. Purchasers of his NFTs were entered into sweepstakes for a chance to score a meeting with the former president.