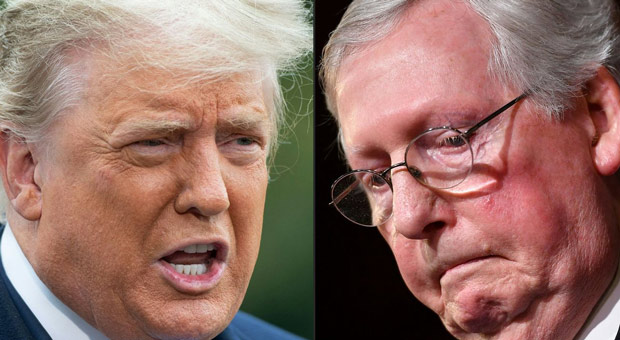 Trump criticized McConnell in a Truth Social post on Monday for his vote to pass the government omnibus spending bill in 2022.

The former President reiterated previous accusations that McConnell allowed Democrats to push their agenda items along with an annual budget.

“It’s as though [McConnell] just doesn’t care anymore, he pushes through anything the Democrats want. The $1.7 TRILLION quickly approved Bill of the week before was HORRIBLE. Zero for USA Border Security,” Trump wrote.

“If he waited just ten days, the now ‘United Republican Congress’ could have made it MUCH BETTER, or KILLED IT. Something is wrong with McConnell, and those Republican Senators that Vote with him. PRIMARY THEM ALL!!!”

The bill includes a number of provisions to keep the government funded through the next fiscal year, adding a slew of earmark measures lawmakers have sought to include for passage, such as renaming federal buildings after top lawmakers, funding Ukraine, and more.

Trump blasted Democrats for failing to include a measure that addressed the lack of protections at the southern border while calling for Republicans to vote against the measure.

Other Republican leaders also criticized the omnibus bill, arguing Democrats used the midnight deadline to push it through, so lawmakers did not have enough time to read it.

But the bill was able to make its way through Congress, with 18 Senate Republicans backing the bill, including McConnell.

The bill passed the House with a 225-201 vote, with a total of nine Republicans joining Democrats.

Since Trump left the White House, he was frequently attacked McConnell, most notably after the Senate minority leader rebuked the former President’s actions during the Capitol riot and also rejected efforts to challenge the 2020 election results.

As The Daily Fetched noted, 80-year-old McConnell will remain the Republican minority leader in the 118th Congress, eclipsing the late Democratic Sen. Mike Mansfield’s time from 1961 to 1977.

The votes against “old crow” McConnell marked the first time he had received a “no” vote as a leader, signaling the tide is turning against RINO establishment Republicans.

“I don’t own this job,” McConnell claimed after the vote. “Anybody who wants to run for it can feel free to do so.”