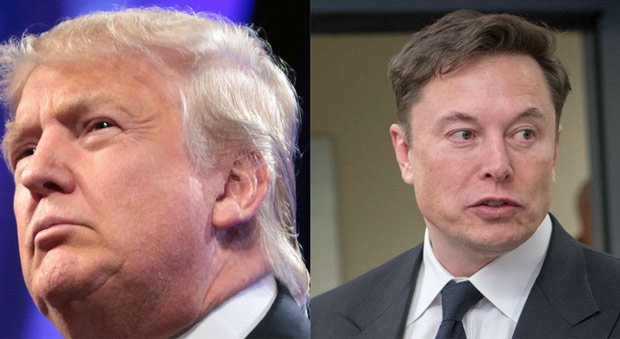 Former President Donald Trump reacted to Elon Musk’s recent Twitter poll, which asked whether or not he should step down as head of the platform.

Following the results of the poll, with 57.5 percent voting in favor of Musk stepping down,

The Twitter CEO said he plans to remain as head of the company until he finds “…someone foolish enough to take the job.”

“I think he wants to step down, I think that’s a good way of stepping down, you know just lose in a poll and say ‘I’m out of here’,” Trump told Chanel Rion of One America News.

Trump was also asked about the ongoing Twitter Files series, which is currently posting explosive drops on the inner workings of Twitter’s collusion with Democrats to censor conservatives.

“Yeah, I’d say he is a hero, it’s a big part of his legacy. I think it is more important than other things he has done and it is very important,’ Trump added.

On Tuesday night, Elon Musk said he would resign as Twitter’s chief executive officer as soon as someone “foolish enough to take the job.”

Once he finds a replacement, Musk said he would run the software and servers teams.

On Tuesday, The Daily Fetched reported on Kim Dotcom’s theory that Musk’s poll could be “a honeypot to catch all the deep state bots.”

“I’m hoping that Elon did this poll as a honeypot to catch all the deep state bots. The dataset for this poll will contain most of them. Some good data-mining and he could kill them all in one go,” he wrote.

On Tuesday, Musk announced he would resign as Twitter’s chief executive officer as soon as he finds someone “foolish enough to take the job.”

Musk said he intends to run the software and servers teams once he finds a replacement.

Musk has a full plate. One critical requirement for success is eliminating the bots so he is dealing with all real users. Important for the representativeness of his platform. Important for advertisers. Laying out honeypots to catch bots is a good idea.
I think Musk does things because he sees them as important to do and sees that he can do them. I doubt he has much intrinsic interest in political discussions. But he has much intrinsic interest in wanting to see free speech prevail. And he is willing to spend and perhaps lose a lot of money to make that important goal happen. The nature of Musks Asperger’s syndrome is that he had to learn to mimic normal people in social interactions but that is just a learned form of acting – inside his head is a very, very logical, high-speed, analytic-synthetic mind trying to solve key problems he thinks need solving. Unlike Trump, who genuinely wants to be loved or liked, Musk does not care about that; he cares about doing what he thinks in his own head is the right thing. He is the right person to do what is needed in our times. We are lucky to have him. The petty zealots of left or right who are butthurt over his failure to conform to their ideological rigidities are just fleas, impotent fleas, to the mind of Musk.